Equipment and Software Investment Growth Forecast Revised to 5.5% in 2014 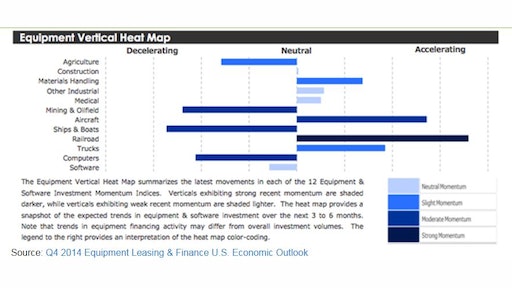 Equipment and software investment is expected to steadily grow over the next six months across most verticals due to a gradually strengthening economy and continued replacement demand.

Investment in equipment and software is expected to grow 5.5 percent in 2014, according to the Equipment Leasing & Finance Foundation's Q4 update to the 2014 Equipment Leasing & Finance U.S. Economic Outlook. The Foundation revised its 2014 equipment and software investment forecast to 5.5 percent, up from 2.6 percent growth forecast in its Q3 Update to the 2014 Annual Outlook released in July. Equipment and software investment is expected to steadily grow over the next six months across most verticals due to a gradually strengthening economy and continued replacement demand. The Foundation report, which is focused on the $827 billion equipment leasing and finance industry, forecasts 2014 equipment investment and capital spending in the United States and evaluates the effects of various related and external factors in play currently and into the foreseeable future.

William G. Sutton, CAE, president of the Foundation and president and CEO of the Equipment Leasing and Finance Association (ELFA), said, “The Foundation’s Outlook forecasts that steadily improving economic conditions point to increased investment and financing activity through the end of the year. Industry confidence has remained consistently positive and capital spending is up, as recent data from the Foundation’s Monthly Confidence Index and ELFA’s Monthly Leasing and Finance Index reflect. Although challenges remain — from geopolitical risks to global growth concerns — we remain optimistic regarding the outlook for the equipment finance sector through the end of 2014.”