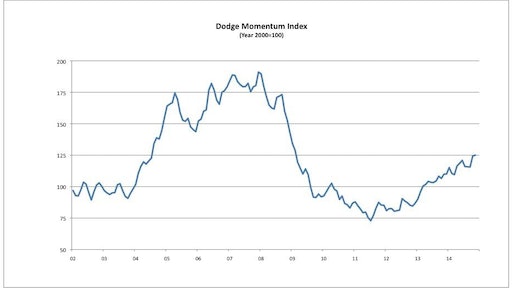 The Dodge Momentum Index is now 14% above the same month a year ago, and is at its highest level since early 2009.

The November rise in the Momentum Index was the result of greater planning activity in the commercial sector, which rose 4 percent for the month. The increase for the overall Index was held back, however, by a 3.8 percent drop in planning activity for the institutional sector. There were three commercial building projects exceeding $100 million that entered into planning during the month: the $232 million Bridgestone America Office Tower in Nashville, Tenn., a $200 million mixed-use development in Eatonville, Fla. and the $100 million Turning Stone Retail & Entertainment Venue in Verona N.Y.