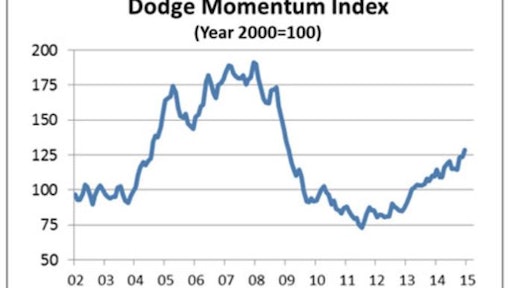 he Dodge Momentum Index rose in December, increasing 4% from a revised 123.8 in November to 128.7 in December, which is 17% higher than one year ago.

The Dodge Momentum Index rose in December, increasing 4 percent from a revised 123.8 in November to 128.7 in December, according to Dodge Data & Analytics. The Momentum Index is a monthly measure of the first (or initial) report for nonresidential building projects in planning, which have been shown to lead construction spending for nonresidential buildings by a full year. The Index is currently at its highest reading since February 2009 and is 17 percent higher than one year ago. The increases seen in the Index in 2014 are a signal that the construction recovery will continue into 2015.

The December rise in the Momentum Index was the result of greater planning activity in both the commercial and institutional sectors. The commercial sector rose 4.1 percent while the institutional sector increased 3.8 percent. There were nine commercial building projects exceeding $100 million that entered into planning during the month: the $150 million phase 1 of the Google campus in Boulder, Colo., a $150 million retail complex in New Brunswick, N.J., the $135 million Monarch Hotel in Black Hawk, Colo., a $100 million dollar office tower in Chicago, a $100 million office tower in Sunnyvale, Calif. and the four phases of the Cannon House office renewal in Washington D.C. (each phase valued at $100 million).