A 0.4% rise in February marked the first increase for construction materials prices in the last six months 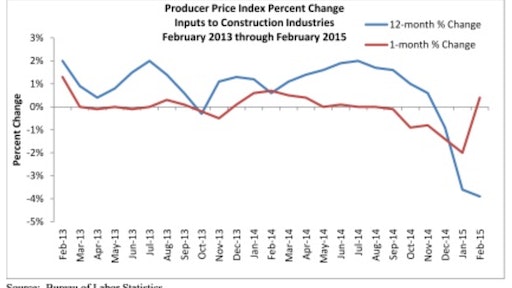 Despite a small monthly price increase in February, on a year-over-year basis, construction input prices fell 3.9%.

The largest monthly gain in petroleum prices in over three years caused construction materials prices to expand 0.4 percent in February, ending a six-month streak when prices failed to rise, according to the March 13 producer price index release by the Bureau of Labor Statistics. On a year-over-year basis, construction input prices fell 3.9 percent. Nonresidential construction input prices also rose 0.4 percent on a monthly basis and were down 4.9 percent on a yearly basis.

"While conventional wisdom suggests that oil and natural gas prices will eventually rise, the adjustment period could be a lengthy one, and although crude petroleum prices were up 12.3 percent on a monthly basis, this is likely a function of an abnormally cold February," said Associated Builders and Contractors Chief Economist Anirban Basu. “This rise is the first monthly gain since April 2014 and the eighth consecutive month in which petroleum prices were down on a year-over-year basis.

"For now, inventories of fuel remain elevated and most believe that the U.S. dollar's upward movement is not at an end,” said Basu. “This, in addition to the quantitative easing that has begun in Europe and the potential for increasing interest rates in America, means that there is likely to be greater demand for U.S. fixed income assets, which will serve to further strengthen the U.S. dollar and put downward pressure on certain key construction input prices. This dynamic was widely apparent in February, during which prices for seven of the 11 key construction inputs failed to rise and no input other than crude petroleum increased in excess of one percent.”

Seven of the 11 key construction inputs did not expand for the month.