States Where Construction is Growing, Struggling Years After the Recession

Mississippi, Hawaii, Louisiana, North Dakota and Montana had the top construction contributions as a percentage of each state's GDP in 2013 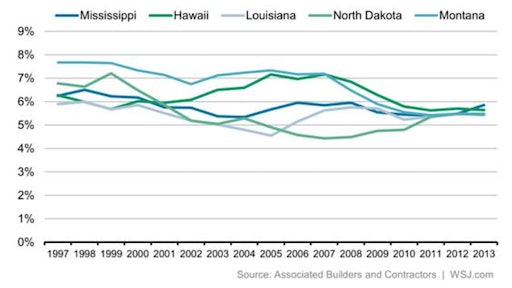 The energy boom—from fracking to refineries and ports—has helped lift Mississippi, Louisiana, North Dakota and Montana’s construction sectors. Those four states and Hawaii are the top five for construction as a percentage of GDP. A resurgence in tourism and defense spending benefited Hawaii.

A state-by-state breakdown and analysis by Associated Builders and Contractors (ABC) has found both pockets of strength and continued weakness across the country. The analysis includes an annual breakdown of construction’s contribution to each state’s gross domestic product in addition to monthly updates on state-level construction unemployment.

State economies are affected differently depending on the level of construction activity relative to their overall economic activity. The bubble in residential construction in the first part of the 2000s is a prime example. The so called “sand states” (Arizona, California, Florida and Nevada) were most heavily affected due to the concentration of overbuilding in those states. The impact from the downturn in residential construction spread out from those states to the rest of the country as demand for inputs to construction fell. However, it ultimately was the fallout from substandard lending and financing practices for residential mortgages that sharply curtailed construction activity and sent the U.S. economy into a sharp recession.

The relative impact of the construction industry on each state’s economy can vary dramatically. It has ranged from a high of 14.8 percent of state GDP in Nevada in 1997 to a low of 2.8 percent in Delaware in 2012. This variation can be seen within a state over time. Nevada’s peak of 14.8 percent, in a period when the joke was that the state bird was the (construction) crane, fell to a low of 4.4 percent in 2012. For Delaware, the impact of the construction industry was as high as 5.8 percent in 1997. Even in the District of Columbia, the range has been from a high of 1.7 percent (2002 and 2003) to a low of 1 percent (2008-10).

In 2013, the top five states for construction as a percentage of state GDP in order from highest to lowest were:

The bottom five states in 2013 from lowest percentage of state GDP to highest were:

The construction industry represents about 3 percent of state GDP for all five states, which is not that far below the 3.7 percent for the United States as a whole. Delaware and Connecticut tend over time to be less dependent on the construction industry. Michigan and Ohio are still recovering from the effects of the Great Recession and are more dependent on manufacturing.

Looking ahead, 2015 promises continued improvement for the U.S. economy and construction. With the U.S. economy still performing well below potential, there is considerable room to grow without undue inflationary pressures. The year is likely to produce significant changes for some industries and will increase the availability of workers for construction, many of whom have been employed in the energy sector.

Lower energy prices are putting money back in consumers’ pockets, which will slowly increase demand for consumer goods and services and the need to produce those goods and deliver those services resulting in demand for office space, lodging, health care facilities and more.

In addition, increases in pay and additional income for workers returning to the workforce or returning to full time from part time will cause those workers to spend more, likely resulting in an increased demand for residential construction, in addition to a slight increase in demand for rental properties.

Construction of single-family structures will remain below the long-run needs of the nation, but will increase over last year’s activity. Construction of multifamily structures, which are already close to the long-run needs of the nation, will increase moderately. Any evidence of overbuilding in a particular locale will be quickly reined in by lenders. In most markets, this means an adjustment period of two to three months as the oversupply of rental units is absorbed and demand for rental units again puts upward pressure on rents. Thus, expect overall residential construction activity (both single-family and multi-family) to advance somewhat faster in 2015 than in 2014.

One of the big unknowns is what government spending on infrastructure projects will be this year. A number of politicians on both sides of the aisle have touted the importance of infrastructure to the U.S. economy and indicated a willingness to fund such projects. At the same time, there is little agreement on how to fund these projects.

Risks to the forecast

There are risks to this modestly optimistic economic forecast. The complete fallout from the significant drop in energy prices may play out in unexpected ways, though we believe that, on net, the effects will be positive for the U.S. economy. At some point (most likely in the third quarter of this year), the Federal Reserve will begin a process of raising interest rates. The increases in 2015 should not have a significant impact on economic activity. Other, positive forces should more than offset the negative impact of higher rates. The Fed also will be cautious in its moves to raise rates for fear of undermining the expansion, but the risk of too fast an increase in rates remains.

Another risk is the recession in Europe, which is already hurting U.S. exports to Europe. On the other hand, lower energy prices greatly benefit European economies and should help limit their downturn. Although we expect the negative impact on the U.S. economy to be fairly modest, the risk for greater fallout exists.

The biggest risk from Europe to the forecast is from what happens to the euro and how that ripples through the financial markets. The impact of the exit of a nation from the euro (voluntary or otherwise) is unknown. Greece, of course, is the most likely candidate to leave the euro but not the only one. Italian and Spanish economies continue to pose a risk to the euro and the European Union.

Although these risks to the forecast are real, we believe that most of the risks will be avoided or the negative effects from them will be limited. We expect the U.S. economy to perform somewhat better this year than last and for the construction industry to benefit from that improvement.

From 1997 through 2013 (the latest year for which annual data are available), the value added by the private construction industry as a percentage of national gross GDP declined from a high of 6.14 percent (in 1997 and 1998) to a low of 3.69 percent in 2011 to the still-too-low 3.73 percent in 2013. Although this is an accurate look at the sector, it understates the impact of the construction industry on the economy. Since a value added measure is used, this measure does not include the value of material inputs or the impact on other parts of the economy.

Beyond the construction activity itself, construction drives demand for building materials. This ranges from basic materials, such as sand and gravel for cement and iron ore for steel, to basic products, such as steel, rebar, cement and concrete, to more finished products, such as wallboard, oriented strand board (OSB), windows, doors, and cabinets. It also adds to demand for heavy equipment such as cranes, bulldozers, and frontend loaders. Also not included in the construction industry’s contribution to GDP are transportation services to deliver materials to a construction site, financial services (for financing projects and purchases of projects), and sales and leasing services once a structure is completed.

Finally, there is an additional ripple effect of construction to parts of the economy not directly related to construction. This ranges from workers purchasing products and services with the extra income from working on a project to buyers and renters purchasing items to be used in a newly completed structure. The latter includes equipment for a new factory, furniture for an office or residential property, and appliances for commercial and residential units.

Taking all these effects into account, a conservative estimate of additional impact of the construction industry on the economy would be in the range of 2 to 3 percent. A higher estimate would not be unrealistic.