Construction Materials Prices Up 0.2% in June

With a stronger U.S. dollar commodity prices are likely to remain well-behaved with no sudden surge in input prices expected 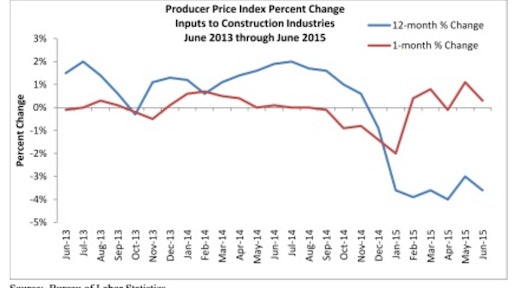 Prices for inputs to construction industries expanded 0.2% in June after increasing 1.1% in May. Year-over-year prices were down 2.2% in June and prices have not increased on an annual basis for the past seven months. The last time this occurred was the third and fourth quarter of 2009 when the global economy was still reeling from the financial crisis; however, June's year-over-year decline in construction input prices was the smallest of 2015. Prices of inputs to nonresidential construction industries rose 0.3% on a monthly basis but are down 3.6% on a yearly basis.

"The June figures do not fully reflect the recent decline in global commodity prices ranging from oil to copper," said Associated Builders and Contractors' Chief Economist Anirban Basu. "The marketplace continues to be dominated by crisis economics, with the most recent crisis revolving around Greece. In such circumstances, the market response is to project slower global economic growth and drive commodity prices lower. The specter of Iranian oil flowing into global markets has also impacted certain key input prices. Therefore, June's monthly input price increase should not be viewed as the beginning of a new trend. At some point, input prices will begin to rise, perhaps aggressively, but that time has not yet arrived.

"One of the other major impacts of recent global news has been a stronger U.S. dollar," Basu said. "A stronger dollar yields many implications, one of them being that commodity prices are likely to remain reasonably well-behaved. Stakeholders should not expect a sudden surge in input prices anytime soon, though the potential resolution of the Greek debt crisis for now could also indicate that significant price declines are also not forthcoming in most input categories."

The key construction inputs that did not expand for the month include: