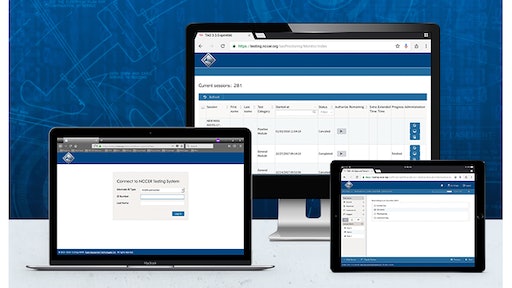 Since its release in September 2017, the NCCER testing system has maximized instructor effectiveness and reduced paperwork.

Since its release in September 2017, NCCER’s Testing System has maximized instructor effectiveness and reduced paperwork. Completely online and managed in-house by NCCER, the Testing System operates on the same platform utilized by ACT and connects seamlessly with the NCCER Registry System.

Now available with all NCCER craft and pipeline covered task tests, users are able to create, launch, score, store and submit module tests completely through the online system. As well as streamlining the testing process, these improvements have also eliminated the need for paper-based testing and record storage. With easy-to-use features and greater capability across multiple devices, module testing has never been more efficient.

Growing in popularity, the system administered an all-time high of 900 tests in one hour — that is 15 tests every minute — and has processed over 600,000 tests online. From school systems, such as the North Carolina Department of Public Instruction, to correctional institutions, including the California Department of Corrections and Rehabilitation, to associations, such as the Associated Builders and Contractors, Inc. (ABC), the NCCER Testing System provides organizations with everything they need to meet today’s standards in construction training. In fact, 430 accredited organizations use the system in over 1,050 craft training facilities.

“NCCER’s Testing System has been a gamechanger here at ABC Pelican. The system not only reduces administrative work associated with paper module testing, but it elevates the level of training offered because each module exam is different,” shared Danielle Birney, director of training administration at ABC Pelican Chapter.

Craft and pipeline test packages are available for pre-purchase at a discounted price. Besides providing reduced rates, the packages come with great perks — tests do not expire, can be used across multiple crafts and may be purchased by credit card or purchase order.

Training sessions with detailed walkthroughs of the new system are offered via webinar and can be registered for at nccer.org/testing-webinars. In-person, hands-on training workshops will be coming in 2019 and can be found on nccer.org/events. A robust library of infographics and how-to documents for quick reference are available at nccer.org/testing or a Testing System User Manual can be purchased at shop.nccer.org.

Industry expert Ken Monlux discusses how to use both for the betterment of your business
Ken Monlux
March 23, 2020
Follow Us