Safety in the Trenches

Access to resources and equipment puts the ball in your court. 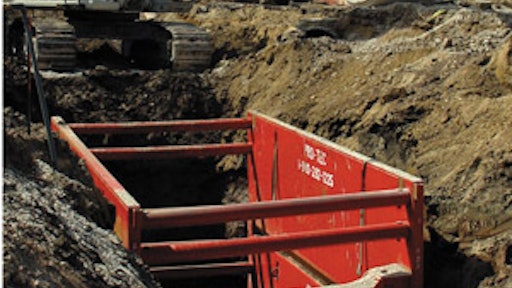 One cubic yard of dirt can fit neatly in the bucket of a 100-hp excavator. And while it may not look like much, that dirt weighs on average 3,000 lbs. or, as Steve Winter at ProTec relates, as much as a Volkswagon. Since trenching involves a lot more than a single bucket load, protecting workers in the trench - who are surrounded by thousands of pounds of soil - is crucial.

The potential hazards of working in deep trenches are fairly obvious. But even a cave-in in a relatively shallow trench can be dangerous.

"It takes only a small amount of soil to create enough pressure to asphyxiate a worker, and a person does not need to be completely covered in soil to die," says Paul McDonnell, vice president - trench safety, United Rentals. "Furthermore, it only takes seconds for a cave-in to become deadly."

The federal standard (OSHA 29 CRF, Part 1926 Subpart P) requires any excavation deeper than 5 ft. to have some type of protective system. However, some states, cities and municipalities have more stringent guidelines, and require protection in trenches at shallower depths.

"There is simply so much weight," says Winter. "Even in a shallow trench, a worker's legs could get caught. And the weight and pressure of the dirt can cut off circulation."

Thanks to modern shoring and shielding devices, you can easily create a safe and productive environment, in which the number of injuries and deaths can be minimized and even eliminated.

The duties of a competent person
Mike West recalls that in the mid-1980s, when he started working for Efficiency Production, Inc., a few hundred deaths occurred each year due to trenching accidents. He believes that today there need not be any if proper shoring and/or shielding are used. "There is no excuse for not being safe," he insists. "Information, training and equipment are readily available."

Training is offered through most manufacturers, many distributors and organizations such as the National Utility Contractors Association, the Trench Shoring and Shielding Association, as well as several rental companies, such as United Rentals' 60 trench safety rental branches.

That puts the ball in the contractor's court. It's up to you, or another "competent person" you deem responsible for the project (as required by the OSHA standard), to implement the right system. The competent person must be capable of identifying existing and predictable hazards in the surroundings, or working conditions that are unsanitary, hazardous or dangerous to employees, and have the authorization to take the proper corrective measures to eliminate them.

One of the first tasks the competent person will need to complete is determining the soil type.

"In understanding trench safety, it is imperative that we be knowledgeable about the soils and rock formations we may encounter, and accept that they both have typically unpredictable behaviors," says Keith Lamberson, Trench Shoring Systems, and chairman of the Trench Shoring and Shielding Association. With that in mind, understand that a trench dug into one area of clay may stand for several weeks without significant deterioration, while a similar trench cut in the same general area can collapse within minutes of being dug.

To assist in determining soil types, OSHA has outlined a soil classification system (outlined in Appendix A of Subpart P) that categorizes soil and rock deposits in a hierarchy of stable rock (vertical sides remain intact when exposed) and types A (clay, silty clay, etc.), B (silt, sandy loam, etc.) and C (gravel, sand, etc.), in decreasing order of stability.

While visual and manual tests can be done to determine qualitative information regarding the excavation site in general, a soil sample may be required for large, deep jobs that can encompass several soil types and several protective devices. A lot of accidents happen in A and B soils where there is a false sense of security, notes Winter. "It looks like it will never cave-in and they don't think they need any protection," he says. "But it can cave-in."

Options to create a safe environment
There are basically three systems for providing a safe environment for trench workers: shoring, shielding or sloping. Understanding the characteristics of each will help you select the appropriate solution(s).

Since numerous factors determine the best system for a given project (depth, width, nearby structures, working space requirements, soil type, etc.), you may need to incorporate more than one method into any solution. "Every excavation has its own characteristics and a solution must fit an entire project," says McDonnell. "A large job frequently requires a combination of protective systems."

Sloping, or benching, doesn't require any "hardware" or installation devices. Instead, it keeps workers safe by cutting back the trench walls to an angle that removes potentially dangerous dirt and eliminates the chance of soil collapsing into the work area. The OSHA standard specifies slope angles, and restricts where sloping may be used.

Shielding is used to protect workers from trench cave-ins. "They don't prevent a cave-in," clarifies Frank Balluff, president, ProTec. "Rather, they protect or 'shield' workers should a cave-in occur."

These systems are considered passive, and are suitable for open areas where you don't need an active support system for safeguarding structures nearby. They are best-suited for relatively shallow excavations due to the difficulty and cost associated with lowering the devices - especially large, heavy, steel models - into a trench. When used properly, they permit a relatively narrow trench, notes Lamberson, reducing the amount of restoration work required when the project is completed.

Trench boxes are a common shield system due to their comparatively inexpensive cost to purchase or rent. Plus, they can be used on a variety of jobs; can be used multiple times; and can be moved relatively quickly along the length of a trench. "When compared to sloping or benching, they also allow the contractor to excavate far less soil, so there is far less backfill, compaction and restoration," adds West.

Aluminum shields are popular choices for municipalities and utility crews needing to do repair work. These relatively lightweight, modular systems are easy to handle. Small systems can be hauled in a pickup and hand assembled, then lowered into place with a smaller piece of equipment, such as a backhoe-loader.

Shoring systems exert positive pressure outward on the trench wall to provide an active means of preventing a cave-in. They are the ultimate in cave-in protection because they physically hold back the soil and prevent it from collapsing into the trench.

Some common examples of shoring include pre-engineered systems such as slide rail and hydraulic aluminum shores (crossbraces). Some distributors will also offer plans and equipment for engineered systems that include beam and plate projects; and some specialty contractors can do steel sheet piling and wood lagging. All of these types of systems tend to be customizable for individual jobs and will support the soil to maintain the integrity of any nearby roadway, railroad, building, etc.

Hydraulic aluminum shoring is a good choice for municipal repairs being done near existing utilities and in relatively stable soils, says Balluff. "They are typically small enough to be handled by hand," he says. "And you can work the shores around existing utilities to provide support to work safely in the trench."

Its larger cousin, the slide rail system, is becoming more common due to its economical cost compared to other active support systems, such as wood lagging and plate and beam. A slide rail system can be used in larger, wider applications than hydraulic aluminum shores. It is a popular choice for metropolitan areas where you don't want to disturb much soil.

"Slide rail systems are like big erector sets," says Balluff. "They come in a lot of configurations. You can select the length of panels you need and slide them into the tracks. A big benefit is that you can dig and push as you go because of their 'telescoping' feature. They are also good for marginal soils because they support the soil as you dig down - you're not digging a trench, then inserting a box. It results in a cleaner operation with less soil disturbance. On the flip side, you remove the system from the bottom up, which allows you to bring up the system incrementally so you can compact the soil as needed."

For any system selected, pay attention to the manufacturer's tabulated data. It will outline appropriate specs where each system can be safely used, i.e., to what depths, in what soil types, etc.

"Information about safely digging trenches is very easy to obtain," says Balluff. "There is no reason why anyone should get killed or injured in a trench."

Lack of training on proper use of ladders is the primary cause of more than 81% of fall injuries treated in U.S. emergency departments, and the safety industry is working especially hard this month to get free training to those who work with ladders
Larry Stewart
March 3, 2021