The barrier will be made of 385,000 sq. ft. of marine-grade stainless steel — enough to cover seven football fields 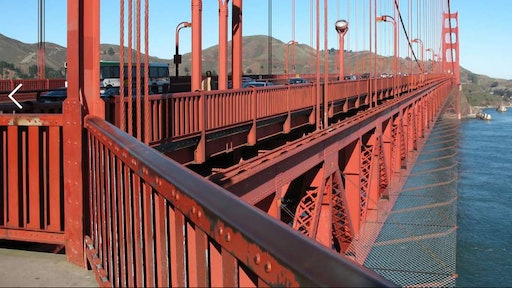 Rendering of what the suicide barrier net on the Golden Gate bridge may look like.
Golden Gate Bridge, Highway and Transportation District

Construction of a coarse web of marine cable beneath the Golden Gate bridge has started, and it will likely take the next two years to complete. The purpose is suicide prevention. Nearly 1,700 people have leaped to their deaths since the bridge opened in 1937.

Shimmick Construction Co. and Danny's Construction Co. won the design-build contract for the $211 million net. The net will hang 20 feet below the bridge's public walkway on steel cantilever brackets and jut out 20 feet from the side of the bridge.

Ideas for a suicide barrier were first hatched back in 1950 but are not coming to fruition until now. Which is disappointing. Safety was such an important issue during construction of the Golden Gate Bridge that it was the first construction site in America that required workers wear hard hats. Plus, a safety net was installed under the bridge floor to prevent workers from falling to their deaths. That net saved the lives of 19 men.

(more on construction of the Golden Gate's new suicide barrier...)

Discussing fall protection and site safety with the formwork company Doka USA.
May 4, 2021
Follow Us