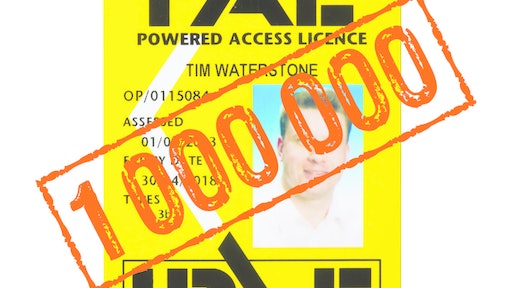 Winners from countries including Australia, Canada, Denmark, Germany, Ireland, Malaysia, the Netherlands, Turkey, UAE, UK and USA received prizes ranging from trips to the IPAF Summit and rental market reports, to T-shirts, hi viz jackets, caps, pens and clipboards. The draw was open to any of the more than half a million valid PAL Card holders who verified their PAL Card at www.ipaf.org/checkpal

Another 10 winners received IPAF Powered Access Rental Market Reports worth around €1,000 each.

“Congratulations to these five PAL Card holders! They will be joining us to hear world-class speakers at the IPAF Summit and be part of the industry’s annual celebration of excellence,” said Tim Whiteman, IPAF CEO. “These prizes celebrate the extraordinary international success of IPAF’s voluntary MEWP operator training programme which is administered by the industry’s not-for-profit trade association – a big thank-you to everybody who has contributed to its success over the years.”

Details on the IPAF Summit and IAPAs are at www.iapa-summit.info

The draw was made by extracting the winners from a list of entrants in a random sequence using software supplied by IPAF’s IT partners Furness Internet and audited by software specialists Mercurytide. The names of the five principal winners were generated by Tony Whiteway, a partner with IPAF’s auditors CLB Coopers, who also oversaw the drawing of the other names and certified the impartiality of the entire process.

The validity of a PAL Card can be checked by using the online verification tool at www.ipaf.org/checkpal

A full list of all prize winners can be found at www.ipaf.org/checkpalandwin

Skyjack Partnership Offers Up to $10,000 to Promote Operator Safety Training Through PAL PLEDGE

Double M Roofing & Construction apparently had fall-protection equipment on site but owner and employees were not using it, as they did two weeks later when OSHA again discovered the company owner and crew working at height without fall protection
Occupational Safety & Health Administration
March 2, 2021