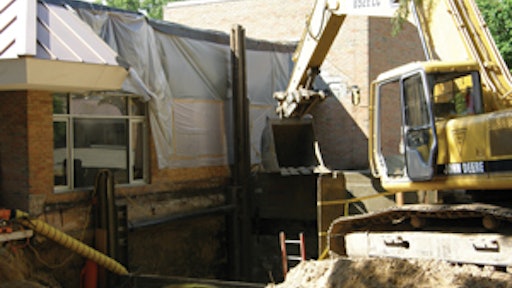 Muskegon Community College (MCC) recently began work renovating several building on their Western Michigan campus.  One challenging renovation was the addition of a new elevator in the Student Union Learning Center.  The new elevator was a challenge because the elevator shaft needed to be built in the corner of two exterior walls accessing three underground floors.  A 28 foot deep excavation was required to pour-in-place the new concrete shaft.

Excavating within the corner of two existing walls is an exceedingly challenging operation, much less shoring the excavation 28 feet deep for an extended period time.  Taking on the daunting task was McCormick Sand, Inc. of Muskegon, Michigan.

Finding a Shoring Solution
Whatever shoring McCormick chose, it needed to be installed directly along the two perpendicular exterior walls where the elevator shaft was to be built.  This severely limited the choices of shoring or shielding that was feasible.  Joel McCormick, President of McCormick Sand, had some experience with a slide rail shoring system, and thought that it might be a solution for the difficult excavation project.

"I've worked with Efficiency Production in the past for other shoring items, so I gave them a call first to talk about maybe using slide rail on this project," said McCormick.  "I talked with Greg (Ross, Efficiency's Slide Rail Manager) for a short time, and he was sure Slide Rail would work.  He came out to the site to take some preliminary photos, and soon we had a plan."

"Dig and Push" system fits in tight spots
Efficiency's Universal Slide Rail is a component shoring system comprised of steel panels (similar to trench shield sidewalls) and vertical steel posts.  The versatile system can be used in a variety of configurations, such as small four-sided pits; large unobstructed working pits as big as 50 x 50 feet with Efficiency's ClearSpan System; or in a linear Multi-Bay configuration to install length of pipe over 40 feet.

Slide Rail is installed simultaneously as the trench or pit is excavated by sliding the panels into integrated rails on the posts-an outside slotted rail first, then an open-face rail on the inside-then pushing the panels and posts incrementally down to grade as the pit is dug; a process commonly referred to as a "dig and push" system.  Efficiency Production is offers the open-face rail design on their Slide Rail posts.

"For this project, we came up with a modified 4-sided configuration that was open on one side against the wall, and we used linear posts and a parallel beam spreader assembly instead of panels against that wall," says Ross.

Ross was on-site for the initial installation.  The Slide Rail System for this project was also unique in that it was designed to be partially removed as soon as it was to grade.  When the entire system was completely installed to 28 feet, the corner posts were tied back with chains so that the panels and parallel beam assembly along the building's perpendicular exterior walls; and the linear post in the buildings apex could be pulled up 16 feet to make room for the elevator shaft to be cast-in-place.

Muskegon Construction, a Construction Management firm, is managing the entire renovation project at MCC.  The renovations of the Student Union Learning Center, including the new elevator, is Phase Two of an overall $1.2 million project which began in April 2009, and will be completed in September.  The concrete work on the elevator shaft is being performed by Patron Construction, of Holton, Michigan.

The elevator shaft is being cast-in-place in stages.  After setting an 18 inch thick foundation slab, Patron poured 16 feet of the elevator shaft at which point the Slide Rail System was backfilled and removed up to that point so the remainder of the shaft could be completed.  The entire 14 foot square, 12 inch thick concrete shaft will be 40 feet tall.

Installing Slide Rail, overcoming obstacles
McCormick's operator, Denny Geeting, was impressed with Efficiency's Slide Rail: "It went in very easily, faster than what I expected," he said.  McCormick concurred, though the "pulling up" of the components to make room for the elevator shaft took a bit of time, and help was called in.

"The Slide Rail went in the ground very smoothly.  Then it took us a long time to get the two sides of the system against the buildings foundation high enough to cast the first portion of the elevator shaft," said McCormick.  "I called Greg and asked him to come back out and see how we were doing.  He came back out, and showed us a better way to attach the chains to the post so that we could pull it up easier.  We got the final few inches pulled up quickly after that."

McCormick used a CAT 345 to install the Slide Rail System; then a John Deere 892 excavator to pull up the system's components to make room for the elevator shaft, and then eventually to remove the system entirely.

McCormick Sand, Inc. was founded in 1962 by James McCormick.  The company originally specialized in processing and mining specialty sand for castings, fiberglass, and other sand-based products.  Son, Joel; and Grandson, Jessie; took over the business in 2002, moving into small general construction, though sand mining remains a small part of the business.  Find out more about McCormick Sand at: www.mccormicksand.com.

James McRay is the Marketing & Media Manager for Efficiency Production, Inc.  He can be reached at 800-552-8800;  jmcray@efficiencyproduction.com

Excavation projects by definition are dangerous operations that require caution and planning, especially when the excavation is intended to create a work space for personnel such as for underground installation repair or installation.
Mike Ross
December 16, 2014