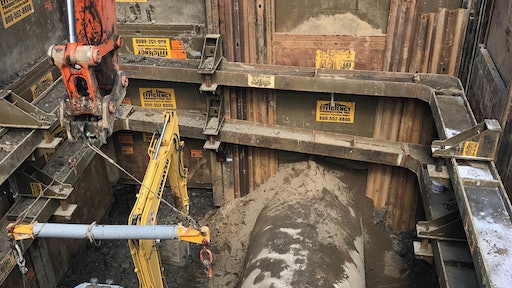 Because of the flexibility of of the slide rail system, Shelly & Sands was able to make “on-the-fly” design changes to the shoring system when the 96-in. existing storm sewer was not in the exact location indicated in the site plan.

Due to the multi-year Interstates 70/71 Columbus Crossroads project, much of the freeways in downtown Columbus, OH, will be under construction into the next decade. With a civil project this large, a lot of the construction is not just road paving and bridge reconstruction; it is the installation or rehabilitation of underground utilities such as the miles of pipes for gas, water and sewers. Though perhaps a little less high profile, these out-of-sight infrastructure projects are just as important.

Taking on one of these behind the scenes, though no less extraordinary, infrastructure projects is Shelly & Sands, Inc. (SSI), based in Zanesville, OH. Founded in 1944, the company serves eight major markets in three states and paves roads throughout Ohio. It also has nine aggregate operations. SSI was the low bidder on an ODOT project to install a new sewer system that diverts water from a large existing sewer line through four hydrodynamic separators that "clean" stormwater runoff before it is discharged into the Scioto River.

This was not an easy excavation project. It was, in fact, four different excavation projects; each a different depth; some with different soil condition; some with existing crossing utilities to navigate; and each having different sized pipes, structures, and/or manholes to install. Complicating matters further was the fact that the Best Management Practices (BMP) sewer project needed to be installed over a length of one block that was bordered narrowly between a western section of the I-70/71 corridor and an apartment building.

All four excavation points were deeper than 5 ft. and required a trench protection system per OSHA regulations. “The first thing we considered were trench boxes; possibly using the equipment that we had in our fleet or we could easily rent,” says Brian Snode, Shelly & Sands’ project superintendent. “But we realized with the soil conditions and the existing utilities that were in the ground, plus the surrounding buildings; dropping in a box just wasn’t going to work.”

The highway and the apartment on each side meant the contractor couldn’t vibrate in sheeting or drive in a lag wall. “When we got down to it, really the only thing that would facilitate our need was a dig-and-push shoring system,” says Snode.

“Dig and push” is a process most commonly associated with installing a slide rail system. Slide rail is installed by sliding steel panels (similar to trench shield sidewalls) into integrated rails on vertical steel post - an outside slotted rail first, then an open-face rail on the inside and finally pushing the panels and posts incrementally down to grade as the pit is dug.

Because Snode had little experience with slide rail systems, he contacted Jeff Riddle at Baker Corp for some ideas. “We’ve worked with Shelly and Sands many times before, and have a good relationship with the company and with their personnel,” says Riddle, Baker Corp’s branch operations manager. “After looking at Brian’s project parameters, I knew that an Efficiency Production [manufactured] slide rail system would work - maybe the only thing that was going to work."

“When Jeff started showing us how Efficiency’s Slide Rail System works, and the versatility of the system to change depending on ground conditions, it was refreshing to see that they had a different shoring option for us,” says Snode.

It wasn’t just Shelly & Sands that had to be convinced on the effectiveness of the system. Snode and Riddle also had to convince ODOT that it would work in the difficult site conditions and meet their safety requirements. “We went over the entire installation and removal process with ODOT; how slide rail actually works and how it meets their safety guidelines for underground construction,” says Riddle.

Slide rail is considered a positive shoring system. It maintains constant pressure against the sides of the excavation and requires no over-digging. This prevents possibly undermining or disturbing the surrounding foundations of buildings, roads or other structures. A positive shoring system is a critical requirement for approval from most states’ Department of Transportation, including Ohio’s, for any underground construction.

Sufficiently assured that slide rail met all safety requirements, ODOT gave SSI the green light to begin work on the new gravity-flow sewer. Crews started from bottom to top; or downstream to upstream; or literally from the bottom of the hill at Short Street to the top of the hill at 2nd Street.

Pit 1 reached down 32 ft. to uncover and reroute an existing sewer line. Utilizing the same slide rail components from the first excavation, Pit 2 was dug and shored for the installation of the four deep precast sump manholes, which contain the hydrodynamic separators.

Pit 3 widened and lengthened the shored space just by adding a few more slide rail components, which allowed SSI to install inflow and outflow vaults and four 18-in. intake/outtake lines. “That’s where the manifold separates the water through the four deep sump manholes and through the screening process to clean it before it reenters the new piping that we built into Short Street,” Snode explains.

Lastly, Pit 4 was excavated for an 18' x 11' x 28' tall precast chamber which intersects a 96-in. existing storm sewer and diverts the flow through a more conventional 42-in. line down to the treatment structures. The fourth pit — the largest of the four excavations — was shored with a 29' x 38' x 32' deep ClearSpan configured slide rail system.

“Jeff and I looked at the ClearSpan pit at least eight times and actually had to redesign it on the fly,” says Snode, “because the big 96-in. line was not in the exact location indicated in the plan, plus everything was right in the middle of the street... It was a challenge, but we were able to overcome all of that because of the flexibility of Efficiency’s slide rail system.”

The 2018 Trench Safety Stand Down will be held between June 18-23. It is supported by OSHA and sponsored by the National Utility Contractors Association, North American Excavation Shoring Association and Safety Ambassadors Club.
Home