Expected 2011 market retail growth to approximately 96,000 units will lift industry to the 1993 level 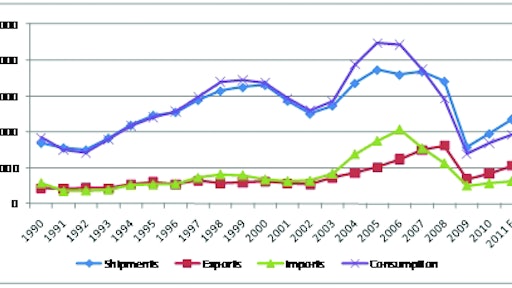 Estimated total U.S. consumption of construction machinery, in units, since 1990

Manfredi suggests that underlying U.S. construction economy remained weak throughout 2010, and machine demand last year was driven by equipment-distributor inventory building and re-fleeting by rental companies. In addition, some contractors were motivated to buy new Tier 3 machines and good used machines ahead of the implementation of the EPA's implementation of Tier 4 Interim emission regulations in primary construction-machine engine sizes on January 1, 2011. Anticipation of the new emission regulations had the effect of accelerating sales in the 2010 fourth quarter.

Manfredi & Associates Inc., based in Mundelein, Ill., is a market research firm that has specialized in the construction, mining, agricultural and material handling markets for nearly 30 years. Contact Frank Manfredi for details of how to obtain a copy of the forecast and of its two monthly newsletters, Machinery Outlook and Machinery Outlook Europe that specialize in the machinery markets, at frank@manfredi.com, or visit the website at www.machineryoutlook.com.