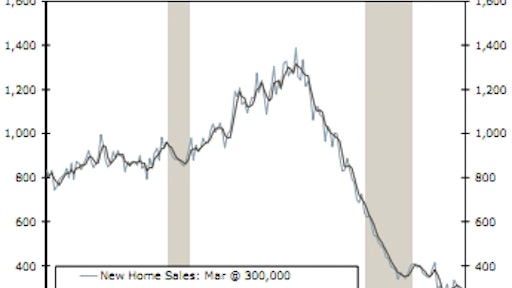 Sales of existing homes rose to a 5.1 million-unit pace in March, but distressed transactions accounted for 40% of overall sales.

New home sales rose 11.1% in March to a 300,000-unit annual pace. Previous months' data were upwardly revised by a net 32,000 units. Median and mean home prices both fell on a year ago-basis.

Sales of existing homes rose to a 5.1 million-unit pace in March, but distressed transactions accounted for 40% of overall sales. Investors accounted for 22% of sales and all-cash buyers rose to a record 35%. The increasing entrance of investors and all-cash buyers is a sign a bottom in home prices is near. Nevertheless, the Wells Fargo Economics Group says housing indicators clearly show that "being on the road to recovery is not the same as being in a recovery."

Wells Fargo expects home prices to continue to decline over the next six to eight months, eventually bringing the peak-to-trough decline in the median price and S&P/Case-Shiller Home Price Index to around 38%. New homes typically sell for about 12% above existing homes, but that premium is closer to 30% today, which is effectively relegating many builders to the sidelines. Unfortunately, the gap will likely remain until the pace of foreclosures moderates.

With foreclosed properties creating a competitive headwind for homebuilders, builder sentiment as reported by the National Association of Homebuilders/Wells Fargo Home Price Index posted a decline in April, which left the index virtually unchanged for the last six months. With builder sentiment at such depressed levels, expectations for future single-family sales fell to the lowest level in six months in April.

Housing starts rose 7.2% in March to a 549,000 unit pace, but much of the increase likely reflects payback from the pullback in February due to harsh weather conditions in the first half of the month. While single-family starts remain at depressed levels, multifamily construction continues to trend upward. The demand for rental apartments has been strong over the past year, and a large number of single-family home sales are now coming from investors intending to turn homes into rental properties.

Despite many of the challenges in the housing market, Wells Fargo economists expect a modest rise in starts in 2011. They project starts to increase to a 620,000-unit pace -- a modest increase of 5.9% from 2010. The increase will stem from improvements in the rest of economy, particularly stronger job and income growth, improved household formation and increased housing affordability.