Construction industry calls for stable, long-term plan not just to secure their own jobs but future US competitiveness 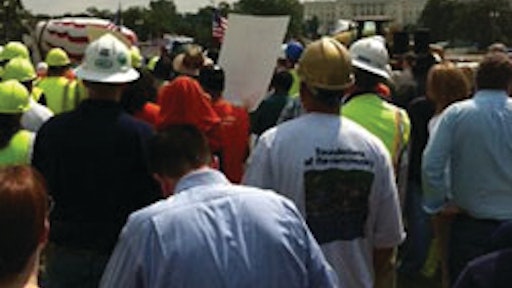 Hundreds of construction workers gathered on the National Mall in Washington D.C. to press Congress to act on long-term transportation spending authorization.

On May 24, hundreds from the construction-industry turned out on the National Mall in Washington D.C. to "Rally for Roads" by calling on Congress to pass surface transportation reauthorization legislation.

Held in conjunction with the Transportation Construction Coalition?s (TCC) 2011 Washington Fly-In, the Rally for Roads featured employees from all facets of the road construction industry including materials providers, road pavers and equipment manufacturers and dealers. It also brought together construction industry leaders, union members, and pro-infrastructure lawmakers.

"Equipment distributors and suppliers are standing shoulder to shoulder with you to fight for a new highway bill," said Dennis Kruepke, president of Chicago-area Case Construction Equipment dealer McCann Industries and 2011 chairman of the Associated Equipment Distributors. "Without a new highway bill, states can't plan. If states can't plan, you don' t know if you have work or not. If you don't have work, neither do I.

"We need to get this issue resolved," Kruepke added. "We need to create good-paying, non-export-able jobs here in the United States."

Kruepke's call on Congress to pass a highway bill immediately stressed that investing in transportation is not only about a prosperous construction industry or even construction jobs, but also about the American economy's ability to compete on the global market.

"We need to turn the heat up on Congress to get them to do their job so that you all can get to work doing a job for America building our nation's infrastructure," said House Aviation Subcommittee Chairman Tom Petri (R-WI).

"If we don't make this a higher priority; if we don't maintain what we have and build for the future, we are going to see our nation move into decline with a lower standard of living for the next generation than we have all enjoyed and our parents and grandparents provided for us," Petri said. "I thank you for coming here and turning up the heat. Don't turn it down till we get the job done."

AED Chairman to Congress: Give Us A Highway Bill Now