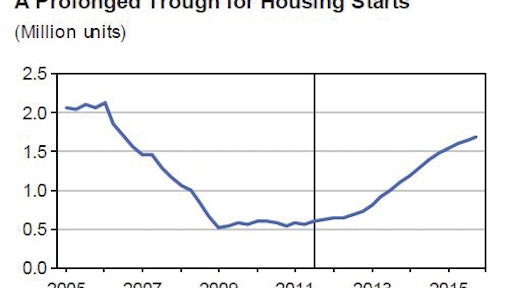 Despite predicting that the Fed will hold U.S. interest rates near zero until 2014, IHS doesn't expect housing start to rise above the 1 million threshold until nearly that year.

The 2012 edition of IHS Global Insight's annual Top 10 Economic Predictions begins with the not-so-reassuring assertion: "The United States will probably avoid a recession," and follows with the not-so-startling: "The Eurozone is headed for a second dip." Meanwhile, China's economy is slowing and there is growing anxiety about the government's ability to engineer another soft landing.

"The problematic combination of private-sector deleveraging, public-sector austerity and lack of confidence in political leaders' ability to navigate these choppy waters will continue to plague the United States and Europe," said Nariman Behravesh, IHS chief economist. "If Europe only suffers a mild recession and China does not experience a hard landing, then world growth will decelerate from around 3.0% (percent change in gross domestic product) in 2011 to around 2.7% in 2012. On the other hand, if the recession in Europe is much deeper [as it could be with the default of one or more Eurozone governments, such as Italy's or Spain's] or the slowdown in China more pronounced [as it could be if their housing bubble bursts], then the global economy will be headed for much weaker growth and possibly another recession."

Behravesh expects the European Central Bank to step in as a lender of last resort if necessary to prevent any major defaults in Eurozone countries, and he says, "The Chinese government has a good track record of engineering soft landings in tough conditions," so he's not overly concerned about the worst downside risks. Recent improvement in U.S. economic conditions have reduced the IHS assessment of risk of U.S. recession to 35%.

The risks are, nevertheless, noted among the IHS Top 10 Economic Predictions.

US Growth Expected to Slow

Paving Market to Hit Bottom in 2012