Coface Group, a trade credit insurer, releases a report looking at the state of the construction sector in North America and globally 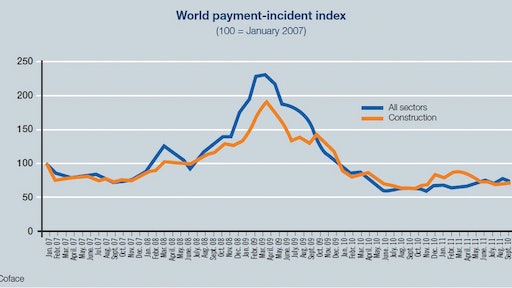 The state of the construction sector closely reflects the world, regional and national economic trends, according to a report issued today on the global construction industry by credit insurer Coface. According to the report, "Global Construction: Substantial Geographic Differences, High Sensitivity to Economic Conditions, Permanent Credit Risk," the sector was badly hit by the 2009 crisis, and Coface notes that a large number of payment incidents were still occurring in 2011.

Sensitivity to Economic Conditions Specific to Each Market and Subsector

Activity is strong in emerging markets that are making up for lagging development, particularly in the areas of public works and private and institutional non-residential construction. Conversely, activity in developed markets is either moderate or stagnant, with particularly large disparities in the residential construction sector linked to differences in demographics, economic environments, credit terms, fiscal legislation, vacant housing inventory, and prices.

This fragile and variable economic climate, combined with changes in orders from the public sector as well as fluctuations in both material costs and demand, explain the increase in payment incidents during the early months of the crisis in 2008 and again from October 2011 onwards.

North America: Large Disparity Between the U.S. and Canada

In the United States, falling prices combined with rising costs have weakened the entire sector. Investment in construction fell by 2 percent in the first 11 months of 2011. Although the decline affects most subsectors, the new building segment has been especially weakened. Non-residential construction also continues to suffer due to state and municipal budget difficulties. In Canada, the recovery that began in early 2010 explains the low level of payment incidents recorded by Coface. A sharp slowdown is expected in the housing segment in 2012 following the introduction of more stringent credit access conditions.

Construction in Europe Will Depend on the Austerity Plans in 2012

After a three-year decline and a 17 percent drop in activity over the period, the European construction sector almost stabilized in 2011, particularly in the residential subsector. Disparities between European countries can be divided into three groups:

For 2012, Coface forecasts a very modest advance in construction in Europe, if the upturn of the housing segment continues. The construction sector will, however, be affected by austerity plans. Public works and institutional building are expected to stagnate under the influence of budget restrictions. Construction of business and industrial premises is likely to be affected by economic uncertainties.

Construction in the Asia-Pacific zone is relatively strong. Activity is expected to recover fairly well in 2012 in Japan and New Zealand, both affected by environmental disasters, in response to the need for reconstruction. In Australia, in the short term, economic uncertainties are likely to hinder the sector, but activity is expected to pick up in the medium term due to favorable demographics.

Sales have fallen in China since 2010 following the steps taken by the authorities to cool down the property market, in particular by restricting bank loans to the sector. The drop in sales, price adjustments and increased inventory levels are expected to slightly slow the activity in the private residential segment, but this will be partly offset by the launch of a new public social housing construction program. The building boom has seen world-class players emerge in China, not only in the construction companies but also as producers of raw materials and machinery manufacturers. These newcomers are more and more active in emerging zones, particularly in Africa and the Middle East.