Construction Recovery Expected to Accelerate through 2015

Even as construction spending limps through 2013, industry economists expect housing to continue to supply the growth foundation while energy and shipping build momentum 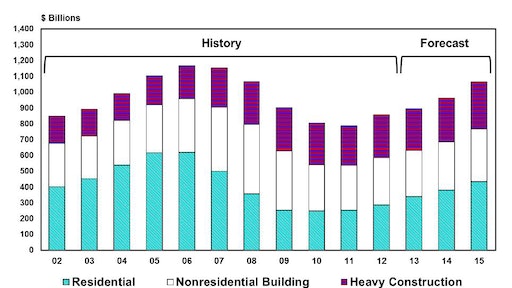 Forecasts for total construction spending from 2013 to 2015 show consistent high-single-digit growth each year, with contributions from all sectors, but the lion's share from housing.

Despite the shadow of the federal government shutdown and plateaued growth in the housing market, construction economists predict 2013 will be a growth year for the industry and expect 2014 and 2015 results to be much stronger.

Markstein calls current economic growth “barely acceptable.” He estimates the U.S. government’s shutdown will inflict a half-percent penalty on fourth-quarter GDP growth. The housing-start growth rate so energetic in 2012 has leveled off, thanks in large part to economic uncertainty suppressing household formation.

Housing growth undergirds construction for the next two years. But the steepest growth rate in AIA's Architecture Billings Index, which signals construction demand about 18 months in advance, is in the commercial/industrial segment.

Simonson expects total construction to grow at 6 to 10 percent per year in 2014 and 2015, lead by increased private spending on warehousing and transportation related to expanding ports to accept bigger ships coming through the enlarged Panama Canal. He also looks for increased spending in energy development, pipelines and processing to support the shale energy boom.

Simonson points out, though, that federal spending has declined for two years in a row (the first time that's happened since Korean War), and will decline more steeply in 2014. The assembled panelists agree that government spending on schools and infrastructure will continue to decline.

No return in Retail construction is not expected to recover, as consumer spending remains tepid and shoppers turn to more online buying. Again, Simonson points out that employers are shrinking office space per employee and divesting themselves of file storage space, telephone switching, and other once-space-consuming functions that can now be accessed from the internet.

But the current trajectory and architectural activity in housing, commercial/industrial buildings and key segments of heavy construction signal high-single-digit growth in total 2014 construction.