From Seattle to Atlanta, volunteers framed homes in Lowe's store parking lots to raise awareness of the need for volunteers to help Habitat. 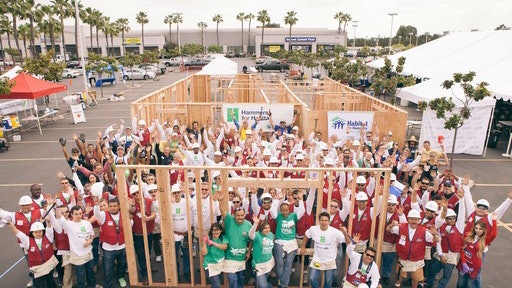 ore than 100 volunteers kicked off spring and the Hammers for Habitat volunteer drive under the California sun at Lowe’s of Central Long Beach.

Hundreds of Lowe's Heroes employee volunteers teamed up with local Habitat for Humanity affiliates on March 21 to build homes in 10 cities across America and kick off "Hammers for Habitat," a nationwide volunteer drive to mobilize 100,000 new volunteers to raise a hammer for Habitat this year.

From Seattle to Atlanta, volunteers framed homes in Lowe's store parking lots and left several standing through the weekend to raise awareness of the need for volunteers to help Habitat reach its goal of serving one million people annually by 2018. In New York, volunteers from eight Lowe's stores partnered with Habitat for Humanity in Monmouth County to raise the walls of a new home in the middle of Times Square.

"To help a family that was really hard hit, it's just a great thing. It really does renew your faith in people," saidLeslie Morris, whose home of 16 years was destroyed by Hurricane Sandy. "There are great people out there that want to do good things for people that had some bad things happen to them. Maybe that will inspire other people to get involved."

In addition to New York City, homes were framed in Lowe's parking lots in Atlanta, Baton Rouge, La., Charlotte, N.C., Denver, Houston, Las Vegas, Los Angeles, Seattle and St. Louis. In the coming months, Habitat will work in partnership with local families in those cities to complete the homes.

"Lowe's has been one of the bedrock partners for Habitat for many years," said Habitat for Humanity International CEO Jonathan Reckford, who participated in the Times Square build. "We're so excited about our long-term partnership, the effort to get 100,000 new volunteers active in Habitat's work and the ripples of impact that will come from that."

Lowe's recently renewed its commitment to Habitat for Humanity with a five-year, $23.5 million donation that will bring Lowe's total contributions to more than $63 million since 2003. In celebration of their renewed partnership, Lowe's and Habitat launched Hammers for Habitat. They are asking men and women across America to give one day to help make the dream of home ownership a reality for a family in their community. Individuals interested in volunteering can find more information at Habitat.org/Lowes.

About Habitat for Humanity International

Habitat for Humanity International's vision is a world where everyone has a decent place to live. Anchored by the conviction that housing provides a critical foundation for breaking the cycle of poverty, Habitat has helped more than 4 million people construct, rehabilitate or preserve homes since 1976. Habitat also advocates to improve access to decent and affordable shelter and supports a variety of funding models that enable families with limited resources to make needed improvements on their homes as their time and resources allow. As a nonprofit Christian housing organization, Habitat works in more than 70 countries and welcomes people of all races, religions and nationalities to partner in its mission. To learn more, donate or volunteer visit habitat.org.

Lowe's supports the communities it serves through programs that focus on K-12 public education and community improvement projects. The company's signature education grant program, Lowe's Toolbox for Education®, has donated more than $38 million to 8,000 K-12 public schools, benefiting more than 5 million schoolchildren. Lowe's Heroes employee volunteers support local community projects and our national nonprofit partners such as Habitat for Humanity, Rebuilding Together and the American Red Cross. Since 2007, Lowe's and the Lowe's Charitable and Educational Foundation together have contributed nearly $200 million to improve communities in the United States, Canada and Mexico. To learn more, visit Lowes.com/SocialResponsibility andLowesInTheCommunity.tumblr.com.

Link-Belt Partners with Habitat for Humanity for Second Year