Construction Contractor Confidence Climbed Steadily in First Half of 2015 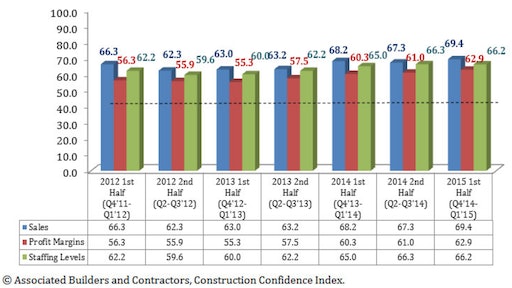 Nonresidential construction confidence has been up for the past 30 months.

Most expect that sales will continue to expand and profit margins will widen further. ABC's weighted diffusion index for profit margins is now approaching the highest reading in the index's three-year history. The sales expectation reading is even more optimistic with nearly three in four respondents expecting an increase in sales. While the rate of new hires will continue to be brisk, the pace of hiring is not expected to accelerate over the next six months due in large part to a lack of available skilled labor.

"The recovery continues and is now in its seventh year, but there is plenty of reason for concern with respect to the U.S. economy," said ABC Chief Economist Anirban Basu. "Financial markets have been jittery, the global economy has been slowing and Federal Reserve policy has become less predictable and more confusing. While U.S. economic expansion continues to be led by growth in consumer outlays, in part due to extraordinarily low interest rates, nonresidential construction spending growth has become an important supporting actor. Nonresidential spending, including on factories, hotels, office buildings and distribution centers, has continued to climb in the face of more readily available financing, lower retail and office vacancy rates and rising hotel occupancy rates.

"Though the U.S. economy refuses to boom, the pace of growth has been enough to allow the average contractor to secure more work at higher margins," said Basu. "Interestingly, the pace of hiring is not set to accelerate, which may be a partial reflection of the lack of appropriately skilled construction workers available for hire. The expectation is for construction compensation costs to continue to rise given expanding skills shortages, but apparently not by enough to preclude steadily expanding margins."

"While the decline in commodity prices has helped to slow construction in parts of the country, including in portions of Texas, Oklahoma and North Dakota, low fuel prices have induced faster investment elsewhere, including in the U.S. auto industry," said Basu. "The result appears to be that the average construction decision maker is more confident than six months ago when commodity prices were higher. A stronger U.S. dollar has served to suppress U.S. export growth, however, and business investment growth remains mediocre by historic standards. The implication is that the U.S. economy is not poised to break out anytime soon, and that stakeholders can continue to expect frustratingly unexceptional growth close to 2% to 2.5%."

A poor SWOT analysis can prevent businesses from realizing their full potential while a good analysis is a cornerstone of good business strategy.
Rich Horwath
September 16, 2020
Follow Us