Making up the shortfall between global infrastructure investment needs and actual spending is high on the agenda for policy makers and investors alike. 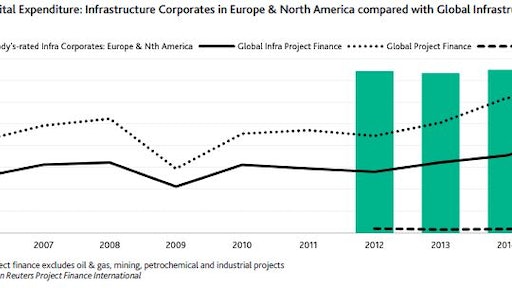 With public sector balance sheets under pressure globally, bridging the gap between global infrastructure investment needs and actual spending, estimated at $1 trillion annually, will require the mobilization of new and existing sources of private capital, according to Moody's Investors Service. The rating agency sees credit enhancement from multi-lateral development banks (MDBs) and regulatory reforms aimed at incentivizing insurers to finance infrastructure as catalysts for further private investment in the sector.

"Infrastructure assets and services are being delivered successfully under a variety of business models and financing arrangements, including through public-private partnerships," said Andrew Davison, Moody's Senior Vice President and author of the report. "We believe that technical assistance and credit enhancement from multilateral development banks, as well as regulatory changes that incentivise insurers to invest in infrastructure, will play a growing role."

"In Europe over 2012-14, we estimate that total capex by Moody's-rated infrastructure corporates was more than 4x the capital value of infrastructure project finance investments in the region. The corresponding ratio was even larger in North America at more than 6x", added Mr. Davison. "However, project finance procurement approaches, which identify and mitigate key risks, are a promising way forward in developing countries."

The International Monetary Fund (IMF) has estimated that for advanced economies, investment in infrastructure during periods of low growth can increase output over the medium term by $3 for every dollar spent. The benefits to emerging market and developing economies from addressing infrastructure bottlenecks can also be significant.

Moody's therefore expects that infrastructure investment will be a priority for policy makers. Governments are responsible for the policy framework and overarching strategy for infrastructure procurement, shaping the environment in which market participants operate.

Report: Large Increase in US Infrastructure Spending Will Be Slow to Develop