Nonresidential Construction Index for Q2 2017 slipped 1.1 points to 61.4 but remains at an optimistic level 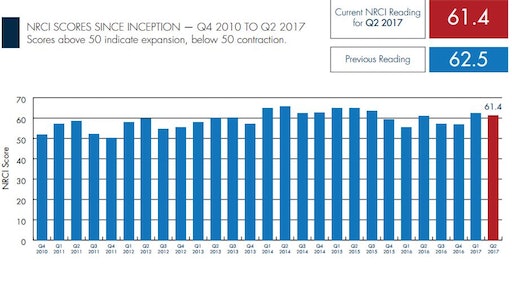 FMI’s forecast for 2017 predicts an increase of 6% for the total value of construction put in place in the U.S. With GDP most recently reporting 2.1% growth in the fourth quarter of 2016, construction growth of 6% looks solid. Although this is a drop from the hot pace of growth from 2013 through 2015, it seems to indicate that the recovery bounce is over and more normal growth is in store for the next few years.

The Nonresidential Construction Index (NRCI) score for the second quarter slipped 1.1 points but remains at an optimistic 61.4. The backlog index indicates a median of 12 months, unchanged for the last three quarters, and the cost of labor index is still indicating higher costs. When labor and materials costs rise, the overall NRCI index decreases somewhat. Nonetheless, FMI points out that rising costs of labor and materials indicate that the economy is supporting these increases.

Other economic components gained or lost within a point of last quarter’s results. The areas to watch, however, are the market indices. As in the Outlook forecast, panelists expect manufacturing construction to grow solidly for the next three months to three years. Other markets are still registering positive numbers, but lodging, office and commercial construction indicate that NRCI panelists expect a sharp downturn in those markets next year, particularly for commercial and lodging construction.

Demand for New Homes on the Rise