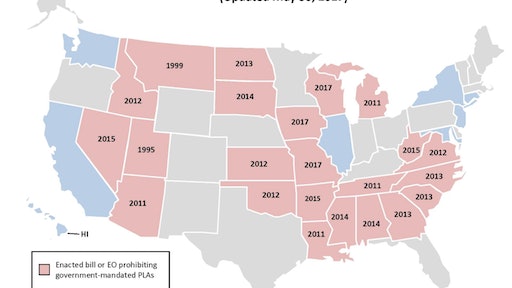 Missouri is one of 23 states that require government neutrality toward PLAs on taxpayer-funded construction projects, including Wisconsin and Iowa, which enacted similar laws this year.
Associated Builders and Contractors

Missouri Gov. Eric Greitens (R-Mo.) signed legislation into law that will promote fair and open competition on contracts for construction services funded by Missouri taxpayers. SB 182 ensures controversial project labor agreements (PLAs) cannot be mandated by the government on state, state-assisted and local construction projects, guaranteeing that the almost three out of four members of Missouri’s private construction workforce who have chosen not to join a labor union can fairly compete to work on projects funded by their own tax dollars.

“Taxpayers cannot receive the best product at the best price from responsible contractors when government caters to special interests by mandating PLAs, which steer contracts to unionized firms. This creates a labor monopoly for unionized workers, who make up about a quarter of Missouri’s private construction workforce and just 14% of the construction industry nationally,” said ABC Vice President of Regulatory, Labor & State Affairs Ben Brubeck.

“As Congress and the Trump administration consider a $1 trillion infrastructure proposal, they should follow the lead of Missouri and 22 other states by immediately enacting a similar policy that will maximize competition, reduce costs and guarantee the fiscal accountability taxpayers deserve on federal and federally funded construction projects.”

When mandated by a government agency on taxpayer-funded projects, PLAs drive up the cost of construction projects between 12% and 18%, according to a series of academic studies. A study published last week found Ohio school projects subject to government-mandated PLAs were 13% more expensive compared to school projects not built with PLA mandates.

PLAs typically ensure construction contracts are awarded only to companies that agree to recognize unions as the representatives of their employees on that job; use the union hiring hall to obtain workers at the expense of existing qualified employees; obtain apprentices through union apprenticeship programs; follow inefficient union work rules; pay into union benefit and multi-employer pension plans workers will never benefit from unless they meet vesting requirements; and force workers to pay union dues and/or join a union as a condition of employment.

Missouri is one of 23 states that require government neutrality toward PLAs on taxpayer-funded construction projects, including Wisconsin and Iowa, which enacted similar laws this year.

At the federal level, ABC and a coalition of construction and industry stakeholders asked President-elect Trump to issue an executive order to prohibit government-mandated PLAs on billions of dollars’ worth of federal and federally assisted projects, reversing President Obama’s order.

On March 28, a U.S. House of Representatives committee favorably reported the ABC-supported Fair and Open Competition Act (H.R. 1552) out of committee. The bill, introduced by Rep. Dennis Ross (R-Fla.), would extend neutrality toward the use of PLAs to federal and federally assisted construction contracts. The bill (S. 622) was also introduced in the U.S. Senate by Sen. Jeff Flake (R-Ariz.).