Seeking reform on how construction is regulated, funded, delivered, and maintained, administration says ‘Providing more federal funding, on its own, is not the solution to our infrastructure challenges’ 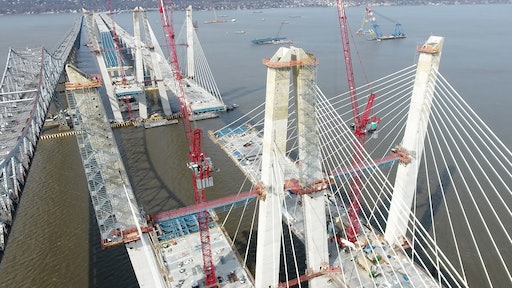 President Trump used documents released with his 2018 budget proposal to provide more information on his plans for infrastructure investment, along with a request to spend an initial $5 billion on infrastructure construction in the fiscal year beginning Oct. 1.

As expected, Trump proposed allocating $200 billion in additional direct federal infrastructure funding over 10 years, with a goal of leveraging non-federal dollars to produce $1 trillion in new project investment over a decade.

A six-page fact sheet light on details pertaining to how the administration would spend that $5 billion in the first year, and higher subsequent amounts, began by criticizing how federal dollars for project construction have been invested until now.

"We will reevaluate the role for the federal government in infrastructure investment," according to the Trump administration fact sheet. "For example, in the Interstate System, the federal government now acts as a complicated, costly middleman between the collection of revenue and the expenditure of those funds by states and localities.

"Put simply, the administration will be exploring whether this arrangement still makes sense, or whether transferring additional responsibilities to the states is appropriate."

It added that "the administration's goal is to seek long-term reforms on how infrastructure projects are regulated, funded, delivered, and maintained. Providing more federal funding, on its own, is not the solution to our infrastructure challenges."

The fact sheet also contained a set of four "key principles" the Trump team will focus on to improve infrastructure investments. They include targeting federal dollars "on the most transformative projects and processes" as a means to leverage use and benefit of taxpayer funds. "When federal funds are provided, they should be awarded to projects that address problems that are a high priority from the perspective of a region or the nation, or projects that lead to long-term changes in how infrastructure is designed, built and maintained."

To back up a second principle – encourage self-help – the fact sheet said: "Many states, tribes and localities have stopped waiting for Washington to come to the rescue and have raised their own dedicated revenues for infrastructure. Localities are better equipped to understand the right level – and type – of infrastructure investments needed for their communities, and the federal government should support more communities moving toward a model of independence."

In another key principle, the document said the administration "will look for opportunities to appropriately divest from certain functions, which will provide better services for citizens and potentially generate budgetary savings. The federal government can also be more efficient about disposing underused capital assets, ensuring those assets are put to their highest and best use."

Trump’s fourth key principle is to leverage the private sector in building projects, saying private investors can provide "better procurement methods, market discipline and a long-term focus on maintaining assets. While public-private partnerships will not be the solution to all infrastructure needs, they can help advance the nation's most important, regionally significant projects."