Report: US Construction Industry Should Continue Positive Trend Through 2017 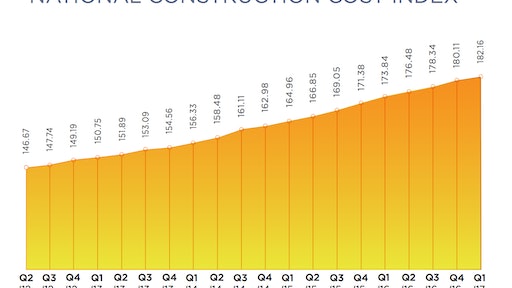 US construction put-in-place ended at a seasonally-adjusted annual rate of $1.21 billion, or 1.4% below the revised March estimate of $1.23 billion.

According to the Rider Levett Bucknall (RLB) second quarter North America quarterly construction cost report, in the U.S., construction put-in-place ended at a seasonally-adjusted annual rate of $1.21 billion, or 1.4% below the revised March estimate of $1.23 billion. General unemployment remained steady into 2017 and the AIA’s Architecture Billing Index (ABI), the leading economic indicator for non-residential activity, is up from the 2016 average with an ABI of 54.3, indicating a healthy start to the year.

Together with international and national cost compendia, the cost research equips clients with complete and relevant information to assist in key business decisions.

Exclusive to the Q2 report, RLB supplements its own research on overhead levels, profit margins and sales taxes — factors that other indices don’t take into account — with information on the hard costs of construction and labor from the Consumer Price Index and Engineering News-Record’s Building Cost Index to paint a complete picture of the construction landscape.

Los Angeles and San Francisco experienced the greatest increases in construction costs (9.08% and 10.99%, respectively), while Boston, Chicago, Denver, New York, Phoenix, Portland, Seattle, and Washington D.C. had more modest increases, ranging from 3.74% to 5.29%. Honolulu experienced a -0.26% decrease in construction costs. All of this appears against a backdrop of a variable economy, which experienced a GDP of 1.20% at the start of 2017, down from 3.2% in the third quarter of 2016.