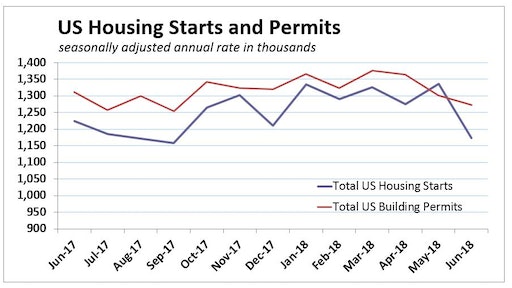 U.S. housing starts were down in all regions in June but more than half of the national plunge came in the Midwest, where starts tumbled 35.8%.
Data: U.S. Department of Commerce

Economists anticipated a 2.2% drop in June U.S. housing starts, but were surprised when the Commerce Department estimated starts plunged 12.3% to a seasonally adjusted annual rate of 1.17 million. Single-family construction starts were down 9.1% and multifamily housing starts plummeted 20.2% lower. 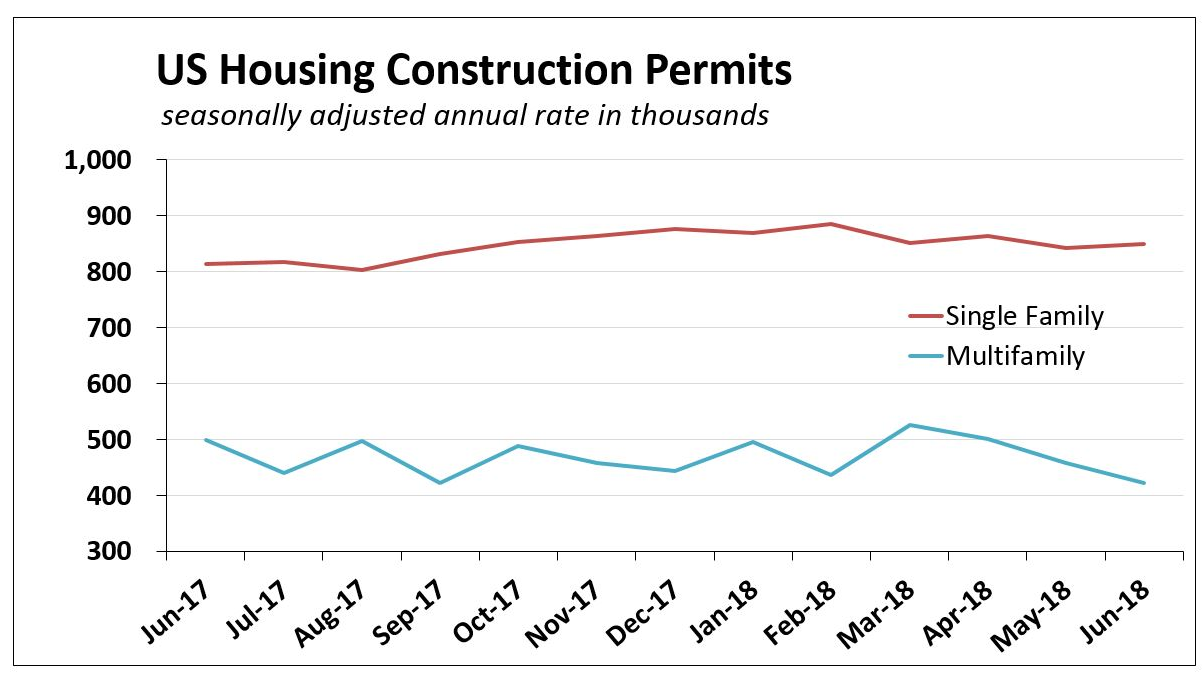 The decline in housing permits issued since January has some economists suggesting housing sales and construction may have peaked for this economic cycle.Permits dropped for the third consecutive month, down 2.2% to a 1.27 million annual rate (economists had forecast a 2.2% gain in permits). Single-family permits managed a 0.8% rise but multifamily authorizations fell 7.6%.

"It’s alarming that the single-family construction permit growth is decelerating, at a time when homeownership is rising and millennials are reaching their peak age to really enter the market and buy their first home," Sam Khater, chief economist for Freddie Mac, said in a statement. "The growing imbalance between demand and supply is the reason home prices continue to escalate."

The U.S. remains in its second-longest economic recovery – nine years – with consumer confidence and employment, builder confidence and housing affordability high. Yet the pace of single-family housing starts has been essentially stalled since the first of the year at about 30% below 1.3 million, what the National Association of Homebuilders calls a normal level of starts. The pace of multifamily starts has trended down since January. 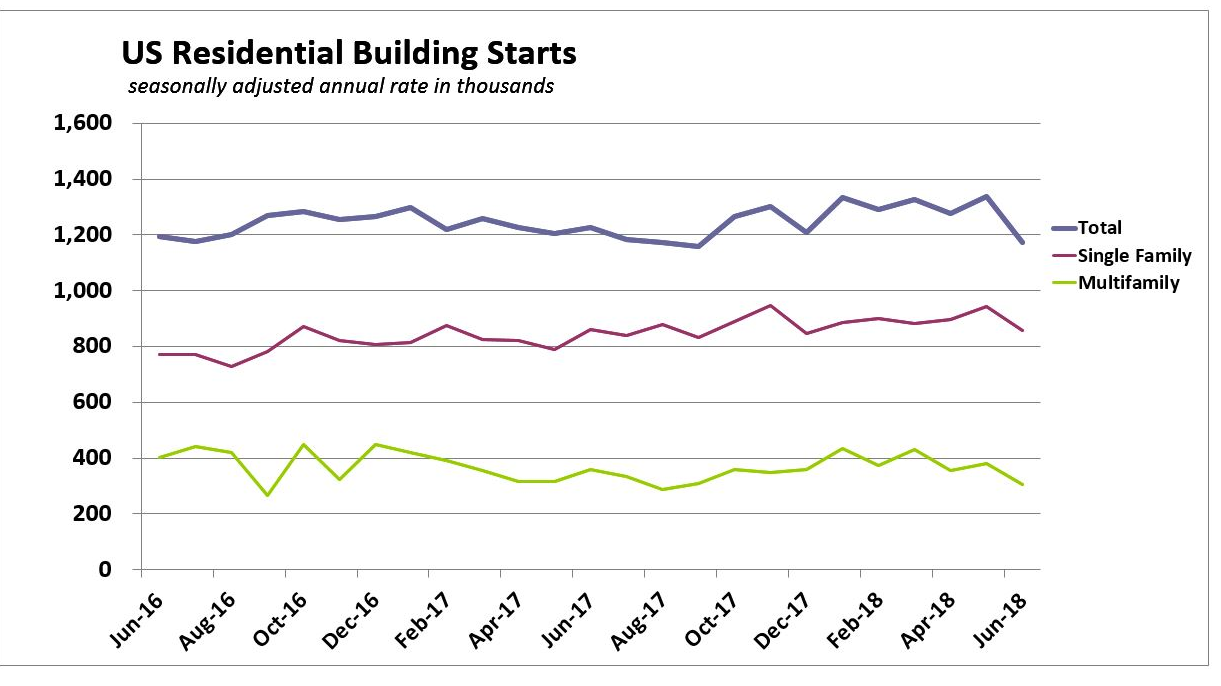 Single-family construction starts were down 9.1% and multifamily housing starts plummeted 20.2% lower.“Recent weakness in housing starts is perplexing, given continued tight supply of homes available for sale and fairly high levels of builder confidence,” according to analysis by Wells Fargo Economics of monthly housing production estimates issued by the Department of Commerce. “We suspect that supply issues are now weighing a little more heavily on homebuilders.

“Higher lumber prices in light of tariffs on Canadian softwood lumber and higher building material prices in general may be causing some builders to hold off on some projects, particularly starts of lower priced homes, which simply do not have enough profit margin in them to absorb thes 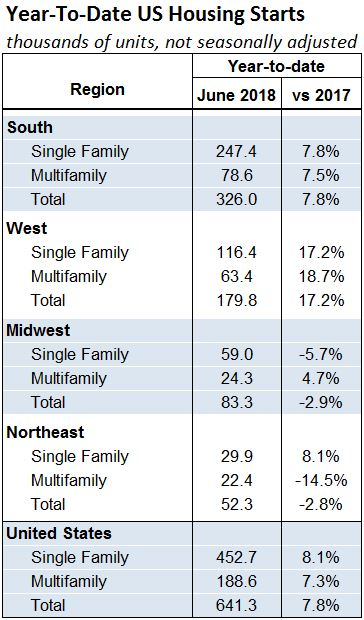 Year-to-date, housing production is 7.8% above the first half of 2017. The weaker pace since the first of the year, plus weak permits, has economists considering how much upside lies ahead.e higher costs. Those higher costs are likely weighing even more heavily on apartment projects, which have seen permits tumble at an astounding 58.2% annual rate over the past three months.”

Starts fell in all four U.S. regions. A little more than half of the nation’s June drop was in the Midwest, where starts tumbled 35.8% after a 51.9% jump the prior month. The June data is considered a return to the region’s soft trend. Year-to-date, housing starts in the Midwest are running 2.9% below their pace in the first half of 2017, and single-family starts are 5.7% lower.

“As disappointing as June’s housing starts are, they do not suggest the housing recovery has shorted out,” Wells Fargo’s analysis suggests. “Builders remain fairly optimistic and buyer traffic is reported to be fairly solid. Stronger job and income growth should push home buying higher in coming months. How much higher is now, once again, open for debate.

"One particularly disturbing trend is the continued drop in the share of consumers that feel now is a good time to buy a home. The most often cited reason for the reluctance to buy is a lack of affordable homes to choose from, a condition not likely to improve much."

Year-to-date, U.S. starts are 7.8% above the first half of 2017, with single-family starts 8.1% better. Permits issued from January to June are 5.7% higher than last year. But the change since the first of the year has some economists disagreeing with Wells Fargo’s optimism.

The Wall Street Journal reports that the Commerce Department’s June numbers resulted in Barclays revising down its estimate of how much residential investment contributed to gross domestic product in the second quarter.

“Housing market activity – sales and construction – likely has peaked for this cycle,” the WSJ reports Ian Shepherdson, chief economist at Pantheon Macroeconomics, told clients after the release of June data. 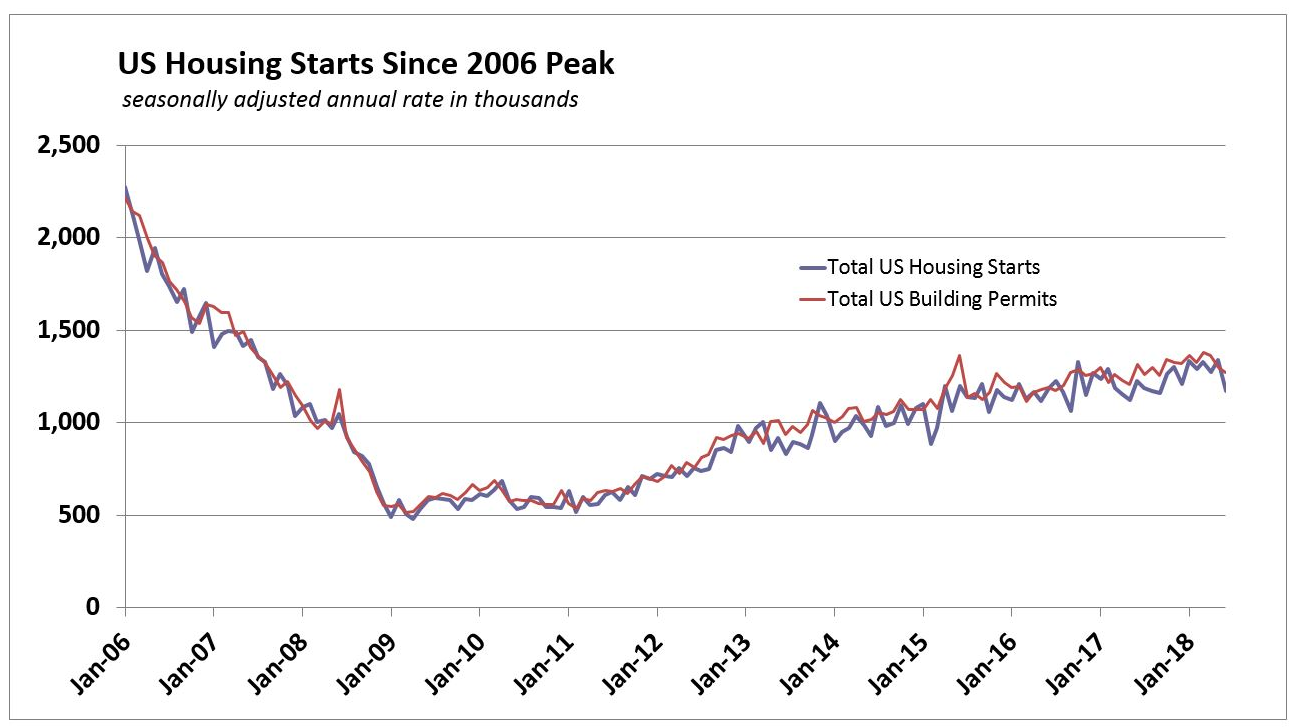 With the U.S. still in its second-longest economic recovery, the pace of single-family housing starts has been essentially stalled since the first of the year at about 30% below the 1.3 million mark that the National Association of Home Builders calls a normal level.

Pace of US Construction Spending Drops Unexpectedly in June