18% of today’s forced labor occurs in the construction and producing construction materials, and the industry can act to deliver slavery-free infrastructure 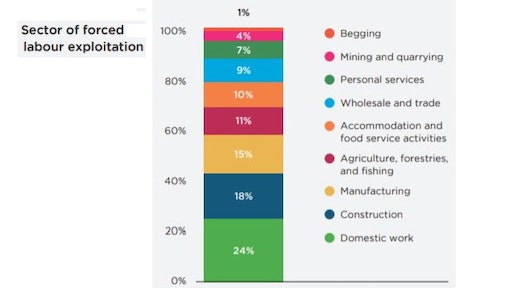 Modern slavery, according to a new report, is a shockingly common part of the global supply of construction materials. From forests to factories, impoverished countries to developed ones, steel, two-by-fours, and copper are produced in places where forced labor and slavery are entrenched practices.

FastCompany.com reports for the U.S., the world’s second-biggest importer of wood products, illegally harvested timber comes from countries such as Russia through others such as China before ending up in buildings and home improvement stores.

Means behind forced labor range from debt bondage to state-ordered work to violent coercion. According to a 2017 report on modern slavery, 18% of forced labor occurs in the construction industry—directly constructing buildings or involved in the mining, harvesting, and production of the materials that make up the built world.

The problem has been happening right under the construction industry’s nose, according to Sharon Prince, CEO and founder of Grace Farms Foundation, a humanitarian organization in New Canaan, Connecticut.

Together with 60 industry partners, Grace Farms Foundation has formed Design for Freedom, a movement that’s hoping to bring more transparency to the building supply chain by making the sometimes-illegal labor practices better known. “We’re putting out a very concerted effort to make it known, so there’s culpability,” says Prince. “Once you know, you can’t un-know it. It’s a different level of responsibility.”