The value of total U.S. construction put in place rose 0.9% on soaring residential spending even as the pandemic-softened economy continues the nonresidential construction slump 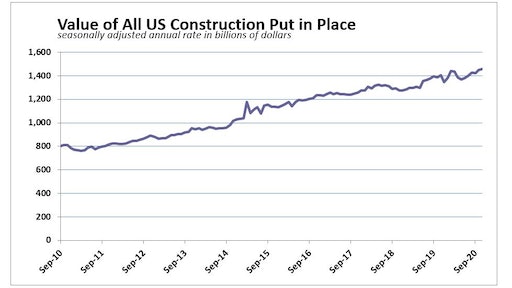 Ten of the sixteen nonresidential construction subcategories saw decreased spending in November, with notable drops in the power construction, commercial and an 8.7% plunge in lodging construction.

“Private nonresidential construction declined for the fifth-straight month in November, while public nonresidential spending slipped for the fifth time in the past six months,” said Ken Simonson, the association’s chief economist. “Unfortunately, our latest survey finds contractors expect the volume of projects available to bid on in 2021 will be even more meager.”

Through the first 11 months of 2020, spending on lodging construction is down 13.6%. Much larger categories have shown dramatic drops, such as manufacturing’s 9.2% plummet, office down 4.3% and educational construction down 4.3%.

“The single hardest-hit segment of the industry is lodging. While leisure travel is likely to rebound as more Americans are vaccinated, business travel may take years to recover. This bodes poorly for the construction of hotels with elaborate meeting spaces located in central business districts or close to airports.

“The near-term nonresidential construction spending outlook is generally not positive,” said Basu. “While there will be certain construction segments that remain active, including data centers, fulfillment centers and certain healthcare facilities, commercial construction is positioned to be weak for the next several quarters. This is reflected in ABC’s Construction Backlog Indicator, which in November reached its lowest level since the beginning of 2011.

“Many public segments have also experienced declines in spending in recent months. The good news is that public construction may receive a substantial boost from post-inauguration stimulus. Infrastructure investment often produces additional opportunities for profitable private development. Suburban commercial developers may also take heart in America’s ongoing residential construction boom, with residential construction spending up more than 16% on a year-over-year basis, as interest in homeownership surges.”

Monthly residential-spending gains are largely attributed to the strong growth of spending on single-family and improvements. Single-family construction spending rose to a $341.5 billion annual pace in November, up by 5.1%. This is in line with the strong readings of single-family housing starts and solid builder confidence. Remodeling spending inched up by 0.2% in November. Meanwhile, multifamily construction spending stayed flat after reaching a record high in October, and was 15.8% higher since a year ago.