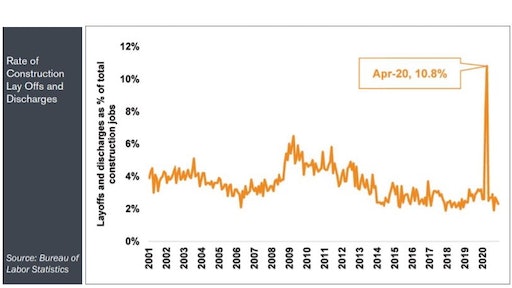 13,000 more workers in December quit their construction jobs than were laid off. It was just the 17th month in 20 years during which quits exceeded layoffs and discharges — a clear indication of labor market tightness.
Bureau of Labor Statistics, Marcum

Despite losing 61,000 jobs on net in February, labor market tightness is set to rear its ugly head again in construction as the industry continues its post-pandemic recovery. According to the 2020 Marcum JOLTS Analysis of construction employment trends, job openings in December fell to 195,000, equal to roughly 2.6% of the available construction positions. This is higher than the average proportion of job openings observed from 2014-2017. It’s also higher than any month during the 2008-2013 period.

Yet, despite the substantial losses, potential workforce shortages once again loom. “When the pandemic began, some thought (and hoped) that the massive job losses observed in March and April would mitigate the skilled labor shortages that have frustrated construction firms for years,” wrote Anirban Basu, author of the report and Marcum’s chief construction economist. “That simply hasn’t happened to any meaningful degree.”

Contractors have shown a reluctance to lose workers in an increasingly tight labor market. “In December 2020, there were 13,000 more workers who quit their construction jobs than were laid off or discharged by their employers,” Dr. Basu notes. “This was just the 17th month in the past 20 years during which quits exceeded layoffs and discharges — a clear indication of labor market tightness.”

Contractors in some regions of the country, and particularly those working in residential construction — which has maintained surprising strength throughout the pandemic — are struggling to find labor, and that has driven up wages.

“In the midst of a gut-wrenching, economy destroying pandemic, average hourly earnings of construction employees reached their highest level on record in January 2021 ($32.11), and average weekly hours worked rose to their highest level since 2019’s third quarter,” Basu points out. “This is what might be expected from a strong economy operating under normal circumstances, not one facing a lingering pandemic and elevated unemployment.”

The report cautions that, historically, some workers who lose their jobs during a recession don’t returnk. “According to the Census Bureau, more than 60% of construction workers who lost their jobs during the Great Recession left the industry permanently by 2013. Many of these workers found positions in other industries, while others retired altogether,” Basu writes.

For the complete report, visit https://www.marcumllp.com/industries/construction.

Information provided by Marcum LLP and edited by Becky Schultz.