Construction is expected to continue to improve but headwinds in the form of material prices could prove a drag on industry growth. 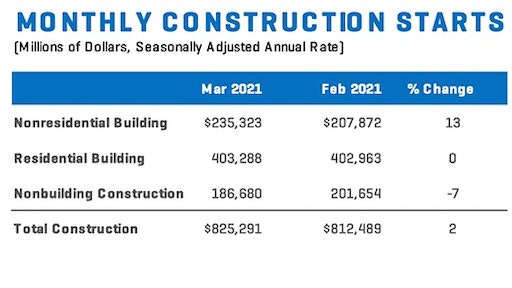 Construction starts saw a welcome increase in March, reported Richard Branch, chief economist for Dodge Data & Analytics, gaining back the momentum lost in the previous month. Branch forecasts construction will continue to improve, but headwinds in the form of material prices could prove a drag on the construction recovery.

According to Dodge Data, total construction starts saw a gain of 2% for the month to a seasonally adjusted annual rate of $825.3 billion, largely fueled by growth in nonresidential building starts. This uptick was only partially offset by a much weaker increase in residential starts and declines in nonbuilding starts. The Dodge Index a monthly measure of the first (or initial) report for nonresidential building projects in planning, also rose 2% in March to 175 (2000=100) from February’s reading of 172. 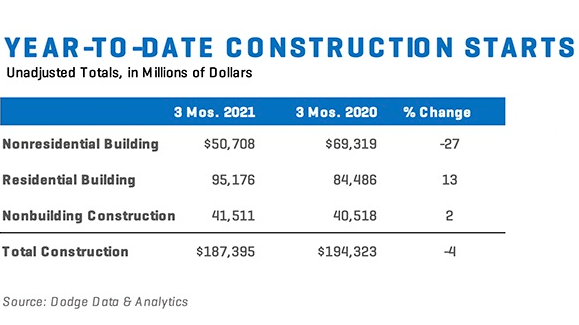 According to a press release issued by Dodge Data:

Nonbuilding construction starts fell 7% in March to a seasonally adjusted annual rate of $186.7 billion, following a sizeable gain in February. Miscellaneous nonbuilding sector (-43%) and environmental public works (-11%) led the decline, whereas the utility gas plant and highway and bridge categories rose 39% and 2% respectively.

Residential building starts increased by less than one percent in March to a seasonally adjusted annual rate of $403.3 billion. Multifamily starts rose by a brisk 33%, while single family starts slipped 9% lower.

Regionally, March’s starts rose in the West, South Central and Northeast regions, but fell in the Midwest and South Atlantic regions.

Just as the construction industry appears to be on the brink of moving toward recovery, a further stumbling block has emerged.

“The March increase in construction starts is certainly welcome news following the past three months of decline,” Branch commented. He adds that he expects construction to continue to improve as the year goes on.

“However, just as the pandemic is beginning to loosen its grip on the economy, logistical problems and the rapid escalation in material prices have stepped in as the primary risk to the construction sector,” he stated. “These issues may restrain opportunity in the coming months, causing the sector’s recovery to lag that of the overall economy.”