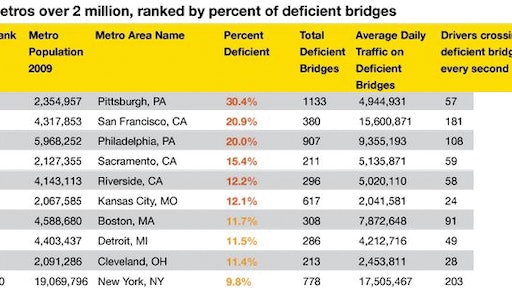 Pittsburg leads large-metro areas (more than 2 million population) with 1,130 deficient bridges, or 30% of all its bridges rated deficient.

On the heels of the sudden closure of a major commuting bridge in Louisville, KY, a new report shows that more than 18,000 of the nation’s busiest bridges, clustered in the nation’s metro areas, are rated as “structurally deficient,” according to this new report from Transportation for America.

In Los Angeles, for example, an average 396 drivers cross a deficient bridge every second, the study found. The Fix We’re In For: The State of Our Nation’s Busiest Bridges, ranks 102 metro areas in three population categories based on the percentage of deficient bridges.

“There are more deficient bridges in our metropolitan areas than there are McDonald’s restaurants in the entire country,” said James Corless, director of Transportation for America, 18,239 versus roughly 14,000 McDonald’s. “These metropolitan-area bridges are most costly and difficult to fix, but they also are the most urgent, because they carry such a large share of the nation’s people and goods.”

The Federal Highway Administration (FHWA) estimates that the backlog of potentially dangerous bridges would cost $70.9 billion to eliminate, while the federal outlay for bridges amounts to slightly more than $5 billion per year.

“The recent shutdown of the Sherman-Minton Bridge between Kentucky and Indiana was yet another reminder of the urgent need to repair our nation’s bridges,” Corless said. “A sincere initiative to fix these bridges would put thousands of people to work while ensuring that these critical links continue to carry people safely to work and that goods can make it to market, now and well into the future.”

Congress has repeatedly declared the condition and safety of America’s bridges to be of national significance. However, the current federal program falls short of the need, even as it allows states to shift funds from maintenance toward new construction, whether or not they can show progress toward rehabilitating deficient bridges.

Some states have worked hard to address the problem and have seen their backlog of deficient bridges shrink in number. However, two problems continue to persist: Existing federal programs offer no real incentives or assurances that aging bridges will actually get fixed; and the current level of investment is nowhere near what is needed to keep up with our rapidly growing backlog of aging bridges.

Last month, President Obama introduced his jobs bill before the Brent Spence bridge in Cincinnati, OH, just weeks after engineers shutdown the Sherman-Minton Bridge due to cracks in the bridge supports, and also identified potential faults in the nearby Kennedy Bridge. Since then, the President has regularly highlighted the poor state of our nation’s bridges and the need to pass a jobs bill that will put construction workers and engineers back to work repairing our bridges and highways.

“The poor condition of our bridges is a problem that is not going away,” said Andy Herrmann, president-elect of the American Society of Civil Engineers, “Most of the nation’s bridges were designed to last 50 years, and today, roughly a third are already 50 years or older.”

In order to prevent future catastrophes on our nation’s roads and bridges, the report recommends that Congress should:

It's About Time to Streamline Project Approvals

The Fix We're In For: The State of Our Nation's Busiest Bridges