Indicator of construction activity down 0.4% from August, but up 2.7% for the year 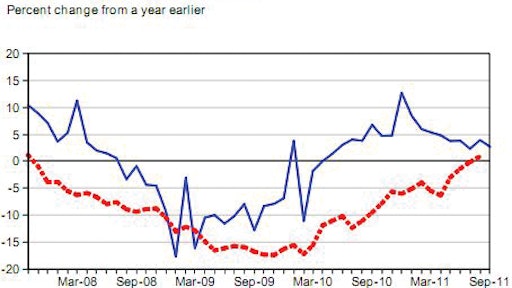 Despite its August-to-September decline, the Wright Express Construction Fuel Consumption Index has shown positive year-over-year growth throughout 2011, suggesting that the construction industry is recovering slowly.

SOUTH PORTLAND, ME (October 19, 2011) – The Wright Express Construction Fuel Consumption Index, which tracks fuel consumption by U.S. construction companies, declined 0.4% in September 2011 versus the previous month. Growth in the seasonally adjusted index has been relatively flat throughout 2011. Despite experiencing a month-to-month decline, the index increased 2.7% on an annual basis in September. The index has had positive year-over-year growth throughout 2011.

"The analysis of the September 2011 data, although reporting a slight decline in fuel consumption from last month, continues to indicate a positive, gradual growth for the construction industry," said Michael Dubyak, Wright Express CEO. "The report also helps to substantiate recent construction industry employment gains, with a jump in September similar to a level not seen since February, and reflects a slow, but continuous recovery in activity."

There have been some positive signs in the construction industry, but the housing sector remains a major concern due to pending home foreclosures and weak demand. With sluggish economic growth on the horizon, home construction is not expected to pick up much until the latter portion of 2012, and sustained improvement is not likely to be evident prior to 2013.

Cloud-based accounting software is a powerful and flexible option designed for construction subcontractor businesses like yours.
September 12, 2020
Follow Us