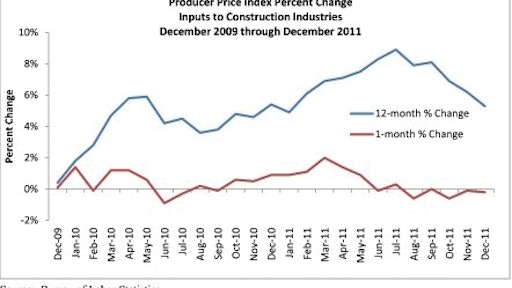 In a reflection of slumping, worldwide demand for construction, materials prices fell 0.2 percent in December, according to the January 18 Producer Price Index (PPI) report by the U.S. Department of Labor. Construction materials prices were down 0.9 percent in the fourth quarter but were 5.3 percent higher than one year ago.

Crude energy prices slipped 0.1 percent in December. However, prices were up 8 percent in the fourth quarter and finished the year 3.2 percent higher than year-end 2010.

"The ongoing decline in construction materials prices has everything to do with America's status as the world's largest and most important safe haven for capital," said Associated Builders and Contractors Chief Economist Anirban Basu. "Because of economic slowing in China, Brazil, India and other parts of the emerging world combined with well-publicized economic issues in Europe, capital is disproportionately flowing to the United States.

"One significant exception to the general trend of falling materials prices was the rise in iron and steel prices," Basu said. "In this category, prices were up 1.3 percent for the month, but this appears to have more to do with weather-related supply interruptions in Brazil and less to do with economic fundamentals."