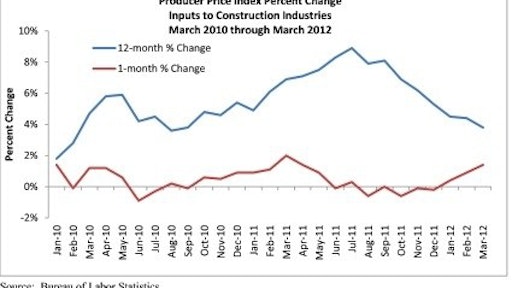 "Most construction materials prices behaved well in March," said Associated Builders and Contractors (ABC) Chief Economist Anirban Basu. "The exception in this report was softwood lumber prices, which rose aggressively after a year of minimal increases. But a host of other input prices - including prepared asphalt, iron and steel, and fabricated structural metal products - barely budged.

"However, inputs into nonresidential construction are up 4 percent for the year, which is cause for concern," Basu said. "Given lingering excess capacity among the contracting community and a general lack of pricing power, the increase in input prices during the past year likely has been enough to squeeze profit margins further for contractors. In addition, recent months have generally seen less vigorous increases in materials prices, which is a reflection of many factors, including a weak construction spending recovery in the United States.

"Perhaps the biggest surprise in this month's report was the sharp decline in crude energy prices," Basu said. "Analysts have been predicting for months that oil and other energy prices are set to surge, in part because of geopolitics. But that did not occur in March, creating a source of relief for an industry that uses substantial amounts of diesel fuel to transport materials, in addition to using many other forms of energy throughout the construction process."