Rising oil prices and turmoil in the Middle East could be affecting the increase in construction materials prices, helping them reach 5.4% higher than one year ago 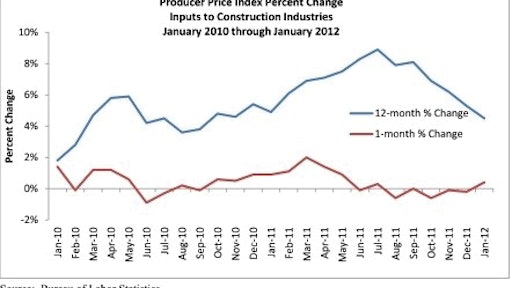 Iron and steel prices also increased 1.8 percent in January and are 7 percent higher than January 2011. Steel mill prices increased 1.3 percent for the month and have increased 9.4 percent during the past twelve months. Prices for plumbing fixtures and fittings increased 0.5 percent compared to December and rose 3.1 percent since last January. Prices for concrete products inched up 0.2 percent for the month and are 1.5 percent higher than one year ago.

In contrast, prices for prepared asphalt, tar roofing and siding fell 2.9 percent for the month and are down 1 percent year over year. Nonferrous wire and cable prices dipped 2.5 percent in January and have decreased 5.6 percent during the past twelve months. Prices for fabricated structural metal products decreased 0.8 percent for the month but are still 3.4 percent higher than one year ago. Softwood lumber prices slipped 0.6 percent in January and are 3.2 percent lower compared to the same time last year.

Overall, the nation's wholesale prices increased 0.1 percent for the month and are 4.1 percent higher than January 2011.

"Increased tensions between Iran and Israel, along with tensions in other Middle Eastern countries, are having an impact on the U.S. nonresidential construction industry," said Associated Builders and Contractors Chief Economist Anirban Basu. "Because oil prices have been edging higher in recent weeks, overall construction materials prices are trending up as well.

"If a geopolitical event occurs, oil prices would likely skyrocket, resulting in a meaningful slowdown in the pace of construction," Basu said.

"Petroleum was not the only construction input to experience a price increase," Basu said. "Iron and steel prices were up 1.8 percent and steel mill prices were up 1.3 percent. These increases likely are associated with a recent decline in the value of the U.S. dollar.

"With global economic activity continuing to soften largely due to the recessionary conditions plaguing much of Europe, there is no assurance that input prices will continue to rise," said Basu. "Much will depend on a successful conclusion to the Iranian nuclear standoff, which appears to be impacting materials prices more than the level of industry activity.

"Construction industry activity across the nation has been edging higher, as predicted by ABC's Construction Backlog Indicator," Basu said. "Still, the gradual recovery in overall nonresidential construction spending volumes may hinge on whether construction materials prices remain relatively stable in the coming months."