Home sales down 4.5% for the month, up 4% for the year leaves the housing market 'stabilized and balanced' 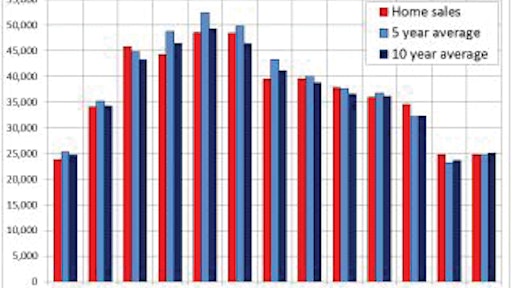 Actual (not seasonally adjusted) Canadian housing-sales activity came in 4.0% above January 2011 levels, and stood even with the five- and ten-year averages for January sales.

“The national housing market is stabilizing and remains well balanced,” said Gary Morse, CREA’s president. “That said, forecasts for economic and job growth going forward vary widely for different parts of the country, suggesting a possible continuation of a softening trend in some markets, as well as the potential that demand will pick up based on strong fundamentals in others. All real estate is local, so talk to your local realtor to understand how price trends in your neighbourhood are shaping up.”

Activity was down in over half of all local markets in January from the previous month. Led by declines in Greater Toronto and Montréal, demand also softened in a number of other major urban centres including the Fraser Valley, Calgary, Edmonton, Winnipeg, Ottawa, and Greater Vancouver.

Actual (not seasonally adjusted) national sales activity was up 4% from year-ago levels in January, the smallest year-over-year increase since last May. As was the case in a number of months last year, actual sales in January 2012 stood close to the five and ten year average for the month.

The number of newly listed homes edged down 1.4% on a month-over-month basis in January following a 2.9% increase in December. The monthly decline in new supply reflects a drop in new listings in a number of Canada’s largest urban centres, which offset a jump in new listings in Vancouver.

Sales fell in January shifting the national market back towards the mid-point of balanced territory and reversing the recent trend which had seen the market becoming tighter over the final four months of 2011. The national sales-to-new listings ratio, a measure of market balance, stood at 53.8% in January, down from 55.5% in December and 55.4% in November.

Based on a sales-to-new listings ratio of between 40 to 60%, 60% of local markets were balanced in January. Compared to December, there were fewer buyers’ and sellers’ markets, and a greater number of balanced markets.

The actual (not seasonally adjusted) national average price for homes sold in January 2012 was $348,178, representing an increase of 1.2% from its year-ago level. This ranks among the smallest increases since late 2010.

On a seasonally adjusted basis, the national average home price rose 1.6% on a month-over-month basis, marking a rebound from a decline of similar magnitude in December. This pattern mirrors the one playing out in the newly launched MLS Home Price Index (HPI), published on February 6.

“Year-over-year comparisons in the national average price are expected to become volatile and may turn negative, reflecting average price developments in the first half of 2011 in Vancouver,” said Gregory Klump, CREA’s chief economist. “At that time, high-end home sales in Vancouver’s priciest neighbourhoods surged to all-time record levels, which skewed the national average price upward considerably. A replay of this phenomenon is not expected this year. As a result, comparisons for national average price to year-ago levels over the coming months will reflect an upwardly skewed base effect. For this reason, year-over-year comparisons should be kept in perspective. Developments in the MLS HPI will provide important guidance on price trends, since it is not affected by the problem of compositional shifts in the mix of sales activity.”

The MLS HPI also takes into account the contributions toward the price of a home made by a broad range of quantitative and qualitative housing features, allowing it to track Canadian home price trends better than any other measure.

Further information can be found at http://www.crea.ca/public/news_stats/media.htm.