Construction Unemployment Dips to 17.1% in February 2012 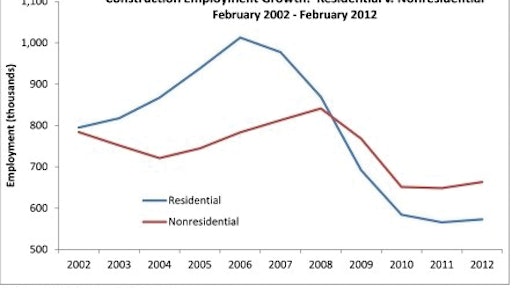 Despite a loss of 13,000 construction jobs in February, the industry's unemployment rate dipped to 17.1 percent, down from 17.7 percent in January, according to the U.S. Labor Department's March 9 employment report.

The nation's construction industry has added 65,000 jobs, or 1.2 percent since February 2011, when the unemployment rate stood at 21.8 percent.

The nonresidential building construction sector added 2,000 jobs in February and has added 15,000 jobs, or 2.3 percent year over year, with employment now standing at 663,200.

The residential building construction sector added 2,000 jobs for the month and has added 7,000 jobs, or 1.3 percent compared to one year ago, with employment at 573,000.

"Predictions for monthly job growth have been on the rise, and February's performance exceeded those expectations," said Associated Builders and Contractors (ABC) Chief Economist Anirban Basu. "However, that is only true for the broader economy, not for the construction industry.

"The loss of nonresidential construction jobs in February represented an end to a three-month winning streak," said Basu. "There are a number of potential explanations for monthly performance, including seasonal factors. Those in the nonresidential construction industry should note that these statistics are subject to revision, and those changes are often significant.

"The recovery in construction spending has been halting to date, and therefore occasional setbacks are to be expected," Basu said. "ABC's Construction Backlog Indicator, which declined during the fourth quarter of last year, foreshadowed both this jobs report and indicates that construction industry employment is likely to be sluggish in the months ahead.

"The good news is that the overall economy continues to mend, implying ongoing recovery in construction spending," said Basu. "This should eventually translate into more stable nonresidential construction employment growth later this year."