Money will reimburse seven states for fixing or replacing highways, bridges and other roadway structures damaged in disasters 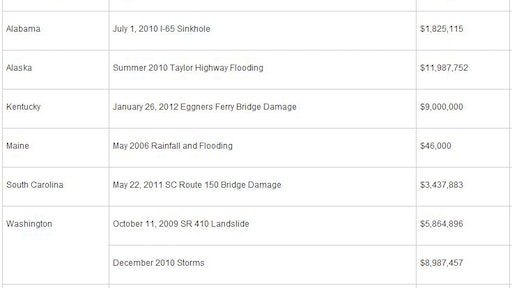 U.S. Transportation Secretary Ray LaHood committed nearly $62 million for seven states to help cover the costs of repairing roads and bridges damaged by a variety of natural disasters and catastrophic events. Wyoming and Alaska receive the biggest payments as a result of damages caused by flooding in both states.

The money will reimburse states for fixing or replacing highways, bridges and other roadway structures. Costs associated with detours, debris removal and other immediate measures necessary to restore traffic flow in affected areas are also eligible for reimbursement.

“Roads and bridges act as vital links in local communities who feel their loss after natural disasters,” said Federal Highway Administrator Victor Mendez. “The Department is committed to repaying states for all the work that was necessary immediately following these events to help people get back to normal faster.”

Seven states will receive a total of $61,949,103: Alabama, Alaska, Kentucky, Maine, South Carolina, Washington and Wyoming. Kentucky will receive $9 million to restore service following the closing of the Eggners Ferry Bridge after it was struck by a cargo vessel in January; Wyoming will receive $20.8 million for repairs following unprecedented snow melt and rains that caused flooding in more than a dozen counties; and Alaska will receive $11.9 million to help repair damage as a result of record flooding.

FHWA’s Emergency Relief (ER) program reimburses states for the repair and reconstruction of federal-aid highways and bridges that suffer serious damage as a result of natural disaster or catastrophic event. The funding helps pay for expenses resulting from extraordinary conditions.