Construction Loses 28,000 Jobs in May But Unemployment Rate Slips 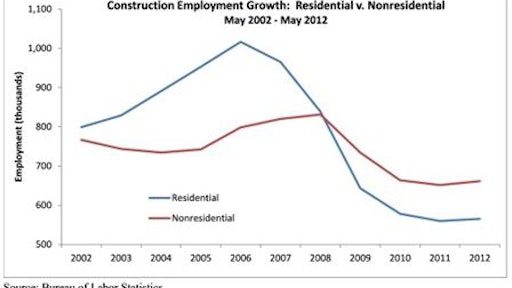 The nation’s construction industry lost 28,000 jobs in May, yet the unemployment rate fell to 14.2 percent, according to the June 1 employment report by the U.S. Labor Department. That is down from 14.5 percent in April and down from 16.3 percent in May 2011.

“There was really nothing to cheer about in this report,” said Associated Builders and Contractors Chief Economist Anirban Basu. “While the construction industry unemployment rate did drop, it’s likely an indication that many construction workers have either found jobs in other industries, or have simply vanished from the workforce."

Nonresidential specialty trade contractors lost 7,700 jobs over the month, but have gained 4,600 jobs from the same time last year, which translates into 0.2 percent annual growth.

The residential construction sector took a hit as it shed 1,000 jobs in May, but gained 5,500 jobs, or 1 percent, compared to a year ago.

“For now, the outlook for the nonresidential construction sector remains decidedly negative, with prospects for another near-term U.S. recession climbing materially in recent months,” Basu said. “While commercial construction and other key segments have gained a degree of momentum over the past two years, existing momentum would eventually be undone by another economic downturn.”