Construction Economy Outlook: Recovery Has Begun and Will Extend into 2014 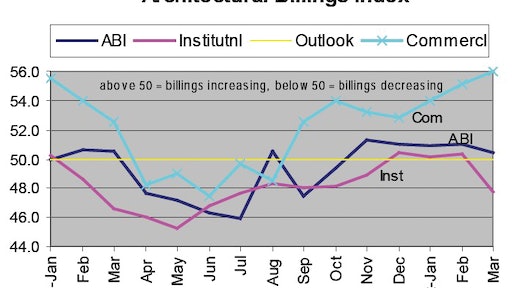 The ABI predicts activity 9 to 12 months out and indicated a slight downturn which we are currently going through. Since July 2011, all the ABI market indices have been climbing. This bodes well for newly anticipated work growth in Q2-Q3 2012.

The construction market has bounced agonizingly along the bottom of the economic cycle for months, but Gilbane Building Co.’s recent economic analysis (Construction Economics – Market Conditions in Construction) suggests market growth for general contractors beginning now and sustaining into the next couple of years.

Some of the positive factors in Gilbane's report are:

However, the report still shows some negative factors affecting the industry:

According to the Gilbane report, Architectural Billings Index (ABI) index readings above 50  indicate more firms reporting increasing billings than firms reporting decreasing billings. The report says the ABI is above 50 for the third month in a row, and since July 2011, all indices have been climbing. The report states, "The commercial index has been above 50 since September, the overall non-residential ABI since October and the Institutional index is above 50 since December. Typically, institutional facilities are usually the last non-residential building sector to recover from a downturn. This bodes very well for newly anticipated work growth in Q2-Q3 2012."

In addition, the report says the FMI first quarter Non-residential Construction Index Report (NRCI) is 58.1, up almost 8 points from the previous quarter. FMI's index of the overall economy provided the strongest improvement in the overall index.

Report Shows Construction Industry Rebound But Not Without Headwinds