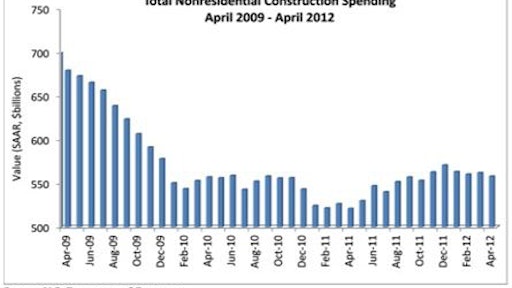 “With the U.S. economy decelerating for a third consecutive spring/summer, the forward looking indicators are no longer positive, implying that nonresidential construction momentum will continue to languish,” said ABC Chief Economist Anirban Basu.

Nonresidential construction spending continues to slide, falling 0.7 percent in April, according to the June 1 report by the U.S. Census Bureau. Spending in April stood at $558.33 billion on a seasonally adjusted annualized basis, but is up 7.1 percent from April 2011.

On the other hand, six construction subsectors posted increases in April, including health care, up 2.6 percent; transportation, up 2.1 percent; water supply, up 2 percent; commercial construction, up 1 percent; office, up 0.5 percent; and highway and street, up 0.4 percent.

In contrast, residential construction spending rose 2.6 percent in April and is up 6.2 percent compared to the same time last year.

Overall, total construction spending – which includes both nonresidential and residential – is up 0.3 percent for April and up 6.8 percent from one year ago.

“For the fourth straight month, construction spending continues to slide,” said Associated Builders and Contractors Chief Economist Anirban Basu. “This current trend is largely a reflection of the way the economy had been when decisions to move forward with projects were made.

“With the U.S. economy decelerating for a third consecutive spring/summer, the forward looking indicators are no longer positive, implying that nonresidential construction momentum will continue to languish,” Basu said.

“Ten of the nation’s sixteen nonresidential construction segments experienced declines in April, including manufacturing and power, which had been leading drivers of spending growth,” said Basu. “The slowdown of spending in these construction sectors is likely attributable to a number of factors, including a weakening global economy and corresponding softness in industrial production, as well as a sense of caution among the owner/developer community with respect to large and expensive projects.

“Due largely to demographic factors, healthcare construction is likely to remain a substantial source of work for contractors going forward,” Basu said. “But there are relatively few other segments offering as much promise.

“Looking ahead, much will depend upon how, when and if the European sovereign debt crisis is resolved, and whether the U.S. Congress will take up issues such as the expiring tax cuts, debt ceiling and payroll tax cut on a timely basis,” said Basu. “In the meantime, uncertainty regarding the global economic outlook is growing and financial capital is becoming increasingly cautious. Little of this improves the near-term outlook for the nation’s nonresidential contractors."