US Census revises power construction spending down 17.7% in 2011, more than doubling 2012 year-to-date spending growth in the sector to 42.5% 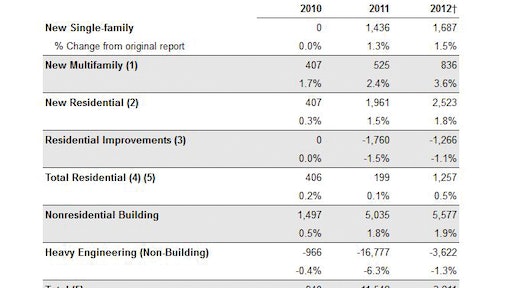 Heavy-engineering spending shows a major downward revision in 2011 as a result of a significant reduction in power-construction numbers. Each year the U.S. Census Bureau revises data for the previous two years based on more complete data than were available when the numbers were first reported.

The biggest and most surprising revision was the large downward adjustment for power construction spending in 2011, down $15.9 billion (-17.7%). Instead of increasing 14.4% in 2011, spending fell 5.1%. The revision of power spending for 2011 was so deep that the unadjusted April 2012 year-to-date power construction spending is actually up 42.5% over the same period in 2011, versus the pre-revision estimate of 20.3%.