GDP growth of 2.8% in Q4 2011 and unemployment falling for five consecutive months (to 8.3% in January) also encourage optimism 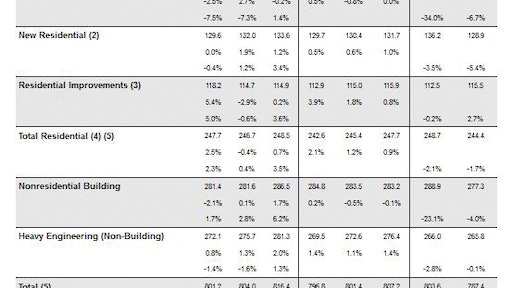 Nonresidential building construction spending picked up in December to $286.5 billion (SAAR), an increase of 1.7%, following a modest 0.1% rise in November. For the year, spending was down 4.0%.

Total public construction spending advanced 0.5% in December after increasing 1.7% in November and was at its highest monthly level since January 2011. For 2011, spending fell 6.5%. The outlook for public spending continues to be for further declines as local governments struggle to balance their budgets and as Congress strives to reduce the federal government’s deficit. Some hope comes from the states, most of which are seeing their revenues improve faster than expected. Meanwhile, total private construction spending rose 2.1% in December, its seventh monthly increase over the past nine months. For the year, private construction spending increased 0.7%.

Europe continues to lurch forward, solving immediate issues without producing true long-term solutions. Although we expect Europe to continue to muddle through, developments there bear watching and remain a major risk to the U.S. economy.

Another major risk is the price of oil. A prolonged, large increase in oil prices, roughly $30 to $50 a barrel above current prices, would damage the U.S. and world economies. The current high price of oil is a drag on growth, but not at a level that is likely to tip the U.S. into recession.

Assuming no recession, the Reed Construction Data forecast is for total construction spending to increase 6.5% in 2012 and 5.9% in 2013.

Construction Spending Ends the Year on an Up Note