Despite a 0.2% March stumble, nonresidential construction spending was 5.7% higher in March 2012 than the same month last year 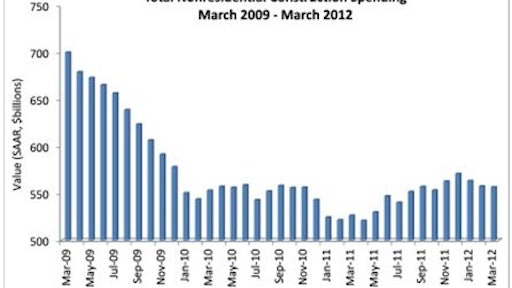 Ten subsectors experienced decreases in spending for the month, including water supply, down 4.3 percent; public safety, 3.8 percent lower; sewage and waste disposal, down 2.2 percent; and amusement and recreation, down 2.1 percent. Eight subsectors posted decreases in spending compared to March 2011, including conservation and development, down 15.6 percent; water supply, 10.1 percent lower; religious, down 6.6 percent; and transportation, down 5.9 percent.

On the other hand, six of the sixteen nonresidential construction subsectors posted increases for the month, including lodging, up 5.9 percent; conservation and development, 3.8 percent higher; office, up 3.2 percent; transportation and manufacturing, both up 2 percent; and communication up 1.1 percent. Nine subsectors registered year-over-year gains in construction spending, including manufacturing, up 39.6 percent; power, up 19.2 percent; commercial, 8.9 percent higher; and public safety, up 7 percent.

“Today’s data on construction spending was mixed, which represents an improvement over recent data releases,” said Associated Builders and Contractors Chief Economist Anirban Basu. “The past few months generally have been associated with negative news regarding the performance of the U.S. nonresidential construction sector.

“While overall nonresidential construction spending dipped in March, the decline in spending was not as severe as reported during the prior two months,” Basu said. “In addition, some of the decline that occurred was perfectly predictable.

“The most positive aspect of today’s release was that private construction spending expanded 0.7 percent for the month, with gains registered in lodging, office and the communication sectors,” Basu said. “Based on a host of leading indicators, private nonresidential construction should continue to rebound during the months ahead, with the presumption being that 2012 will remain a year of economic expansion in America.”