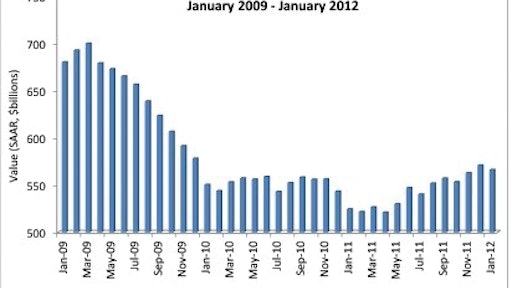 Five of the 16 nonresidential construction subsectors posted spending increases for the month, including water supply, up 9.7 percent; amusement and recreation, 2.1 percent higher; transportation, up 1 percent; health care, up 0.9 percent; and public safety, up 0.3 percent. Eleven of the 16 subsectors posted increases in year-over-year spending, including manufacturing, up 38.3 percent; power, up 24.4 percent; and health care, up 9.7 percent.

Overall, total construction spending - which includes both nonresidential and residential – slipped 0.1 percent in for the month, but was up 7.1 percent compared to January 2011.

"Today's data release should be viewed as rather disappointing," said Associated Builders and Contractors Chief Economist Anirban Basu. "Because of January's unseasonably warm temperatures across much of the nation, it seemed likely nonresidential construction volumes would increase.

"Instead, nonresidential construction spending dipped nearly one percent in January – adding to a list of data points that have been somewhat disappointing lately," Basu said. "For example, the most recent release regarding durable goods orders also indicated a degree of slowing in business spending.

"A handful of construction segments experienced monthly spending growth, including transportation, water/sewer and public safety, which may be reflective of stabilizing state and local government capital budgets," Basu said. "The amusement and recreation category also experienced increases in spending in January, perhaps because the U.S. consumer has been demonstrating a renewed willingness to spend on discretionary items.

"Many economists expect that the U.S. economy will continue to expand moderately during the months ahead, which should generally be associated with modest gains in construction spending," said Basu. "However, if business spending continues to slow, stakeholders can expect construction spending to be roughly flat in the coming months."