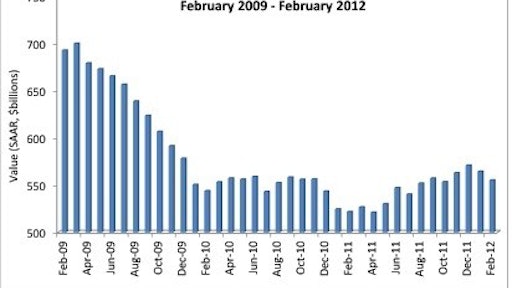 Twelve of the 16 nonresidential construction subsectors experienced decreases in spending for the month, including amusement and recreation, down 3.9 percent; lodging, 3.2 percent lower; water supply, down 2.8 percent; highway and street, down 2.7 percent; and commercial, 2.6 percent lower. Subsectors posting the largest decreases in year-over-year spending include conservation and development, down 24.6 percent; lodging, 9.4 percent lower; religious, down 9.4 percent; water supply, down 7 percent; and transportation, down 5.5 percent.

"ABC's CBI declined during last year's fourth quarter, largely due to the soft patch that emerged economy-wide early last year," Basu said. "The combination of rising commodity and input prices, along with the debt ceiling issues that plagued the nation last year, weakened financing availability and demand for design services, which is now translating into diminished construction activity.

"Last year's soft patch likely impacted construction activity more than the data reflect," said Basu. "If it wasn't for the mild winter, construction spending would have fallen even more sharply in February.

"Overall, the outlook for construction is generally positive," Basu said. "Unless there is another hiccup in the nation's economic momentum, construction spending data will come to reflect the improvement in the broader economy that observers noted during the past half year."

US Growth Expected to Slow