Total construction spending increased 0.9% in May 2012 and is up 7% from May 2011 even while nonresidential construction remained unchanged from the previous month 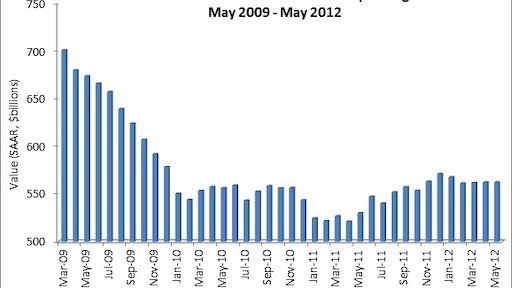 Total Nonresidential Construction Spending May 2009 to May 2012

Eight of 16 construction subsectors registered gains from April to May, including:

In contrast, construction sectors that experienced declines from April to May include:

Meanwhile, residential construction spending was up 2.9 percent for the month and is up 6.2 percent compared to one year ago.

“While private nonresidential construction spending was up for the month, gains were offset by declines in public nonresidential spending,” said Associated Builders and Contractors Chief Economist Anirban Basu. “Spending on public sector construction fell 0.4 percent to slightly below $270 billion on an annualized basis, decreasing for a fifth consecutive month.

“This pattern of rising private spending and falling public spending is likely to persist, but stakeholders should be concerned that private spending momentum may begin to abate if the broader macroeconomy does not begin to re-accelerate,” Basu said.

“With state and local government spending trending down, one of the major surprises this month was a surge in federal construction spending, which was reflected in part in the conservation and development category,” Basu said. “Outlays on federal projects surged nearly 6 percent in May, the largest gain since December and a reversal from the previous month’s decline.

“However, construction industry stakeholders should be aware that the performance of construction spending today is largely a reflection of decisions made months ago when the economy was on sounder footing and did not have to contend with as much uncertainty stemming from the European debt crisis, America’s fiscal challenges and the global economic slowdown,” said Basu.