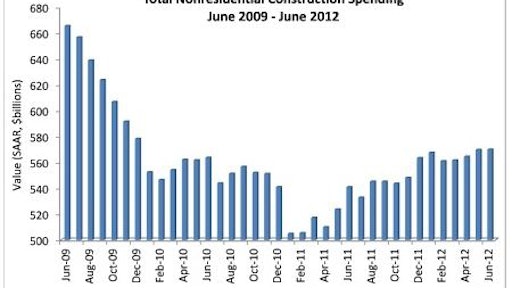 Nine of the sixteen nonresidential construction subsectors posted increases for the month, the largest:

Eight subsectors posted increases from one year ago, including:

Seven subsectors saw decreases in spending for the month including:

Since June 2011, construction spending decreased in eight subsectors including:

“Nonresidential construction spending in June was roughly in accordance with expectations,” said Associated Builders and Contractors (ABC) Chief Economist Anirban Basu. “The volume of spending was virtually unchanged for the month, reflecting an economy that is growing slowly, but with an insufficient level of confidence to produce significant numbers of new construction starts.

“However, this does not suggest that the latest reports regarding construction spending were negative,” Basu said. “Nine of sixteen subsectors registered growth for the month, including highly cyclical segments like lodging and manufacturing.

“There is little reason to believe that construction spending will either substantially accelerate or decelerate in the near term,” said Basu. “Most economists expect the U.S. economy will continue to expand at roughly 2 percent, which was approximately the pace of growth registered last year and during the first half of this year.

“However, as the nation approaches the so-called fiscal cliff, when a number of tax increases and spending cuts take effect, there may be a meaningful pullback in activity during the final months of the year,” Basu said. “Many analysts expect Congress to act, but election year dynamics render many possible scenarios.

“A variety of leading indicators pertaining directly to the construction industry also suggest a flat level of spending going forward,” said Basu. “ABC’s Construction Backlog Indicator suggests the industry is not positioned for a surge in construction activity any time soon.”