$244.6 million design-build contract is one of the Accelerated Bridge Program's five Mega Projects; bids for three others will open within six months 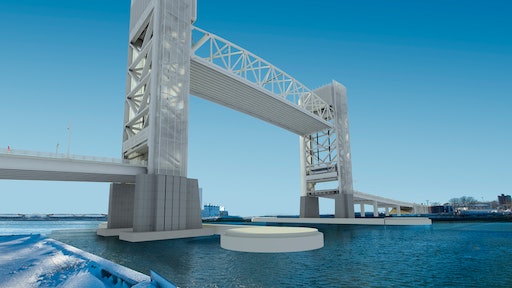 Rendering of the new Fore River Bridge shows it is a vertical lift moveable bridge that will allow for two lanes of traffic in each direction with 5-ft. bike lanes and 6.5-ft. sidewalks on each side.

The MassDOT board of directors awarded its largest contract ever, a $244.6 million design-build contract for the replacement of the Fore River Bridge to White-Skanska Koch, J.V. The bridge carries Route 3A over the Fore River and links the communities of Quincy and Weymouth.

"The current bridge has served commuters well beyond its useful life," said MassDOT Highway Administrator Frank DePaola. "The new vertical lift moveable bridge will allow for two lanes of traffic in each direction and will incorporate our Complete Streets vision with 5-ft. bike lanes and 6.5-ft. sidewalks on each side."

Within the next six months, bid openings are scheduled for MassDOT's remaining Mega Projects. All will be in the construction phase in 2013:

As of June 1, 2012 the ABP Program has completed 90 bridge projects, with another 72 bridges currently in construction, and an additional 25 bridge projects scheduled to start construction within the next year. The eight-year program plans to repair or replace more than 200 bridges.

Since 2008, the number of former MassHighway and Dept. of Conservation and Recreation structurally deficient bridges has dropped from 543 to 439, a decline of 19.2 percent.