Unemployment rate is up 0.6% from August but has declined from 13.3% the same time last year 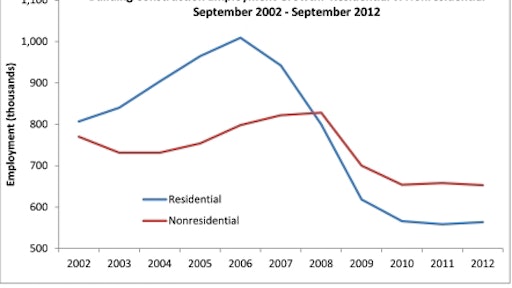 The nation has added 1.8 million jobs over the past 12 months, but the construction industry has lost 5,000 jobs.

The nonresidential building construction sector added 1,100 jobs for the month but lost 12,400 jobs, or 1.9 percent, during the past year. September employment in the nonresidential sector stood at 654,900. Residential building construction sector employment increased by 1,100 jobs for the month and has added 3,200 jobs, or 0.6 percent, since September 2011.

Across all industries, the nation added 114,000 jobs, as the private sector expanded by 104,000 jobs and the public sector expanded by 10,000 jobs. Notably, employment growth in August was revised to an increase of 142,000 jobs from the initial estimate of 96,000 jobs, a 46,000 job swing. The national unemployment rate fell to 7.8 percent in September, marking the first time the unemployment rate dipped below 8 percent since January 2009.

“Though today’s unemployment report was good news for a number of key industry segments, construction was not one of them,” said Associated Builders and Contractors Chief Economist Anirban Basu. “While the nation has added 1.8 million jobs over the past 12 months, the construction industry has lost 5,000 jobs.

“Nonresidential specialty trade contractors have lost 30,000 jobs, remarkable given that we are in the fourth year of economic recovery,” Basu said. “From the perspective of leading indicators, heavy and civil engineering shed 200 jobs last month. While that is hardly a massive total, the implication is that construction starts remain weak, and it is unlikely we will see acceleration in nonresidential construction spending any time soon.

“As the nation continues to hurtle toward its fiscal cliff, which would result in negative gross domestic product growth, there is reason for concern,” said Basu. “Impending tax increases and spending cuts due at the end of the year would further result in a decline in demand for construction services, particularly in nonresidential construction.

“On the other hand, with many projects having been put on hold in recent months due to economic uncertainty, there is the possibility that the latter portion of 2012 may show some improvement,” Basu said. “Owners and developers may decide it is no longer to their advantage to delay projects.”